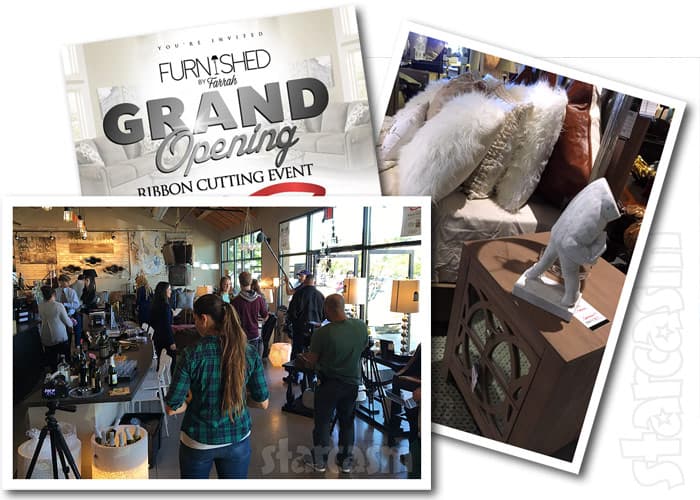 The two retail stores are located next door to each other in the Oaks at Lakeway development in the West Austin suburb of Lakeway, just around the corner from Froco. The Furnished By Farrah ribbon cutting was first, and when I arrived the party had already started! 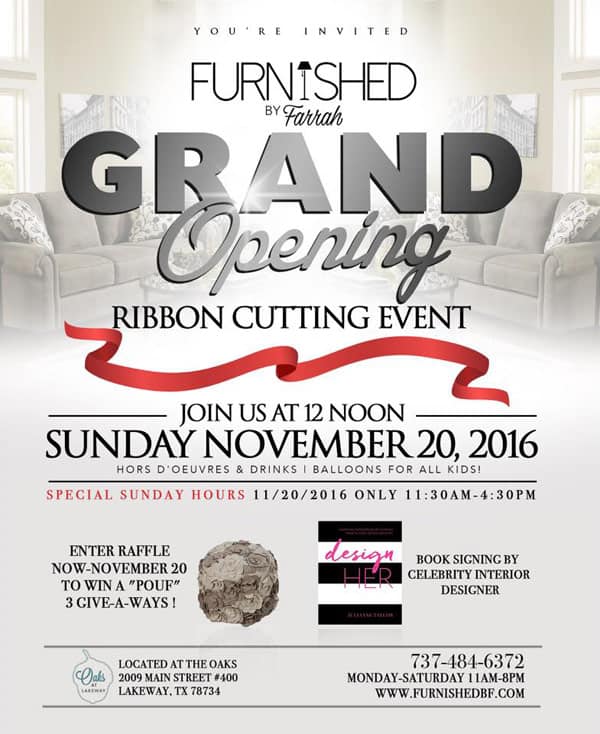 * I should point out that Farrah’s furniture store has actually been open for a while (I visited it a few weeks ago), but Sunday was the official grand opening.

Visitors were greeted by the sounds of DJ out on the sidewalk blasting Christmas music, and there was an elaborate spread of drinks and hors d’oeuvres inside, including Mom & Me wine and Mom & Me food products of course. In addition, Farrah had a very charismatic and extremely talented balloon artist creating fun animals and crazy hats for the youngins as well as color-coordinated corsages for the adults (including Farrah and her mom Debra).

In addition to the entertainment, the event also featured an MTV camera crew capturing all the festivities. Given that the cast had already filmed their brawl-inducing Reunion show, I wondered if they might be filming for Debra Danielsen’s upcoming Being Deb special, but after speaking with some of those in attendance, every indication is that it was for a brand new season of Teen Mom OG! (There has been some speculation that the prior season would be the show’s last, but that does not appear to be the case.)

Here’s a photo of the MTV crew in action — you can see Farrah in the backround (with long blonde hair and a blue dress): 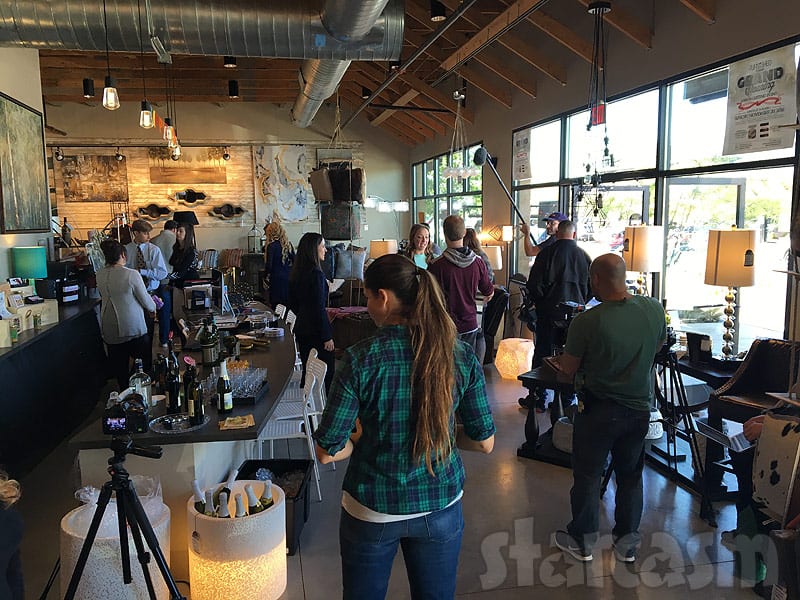 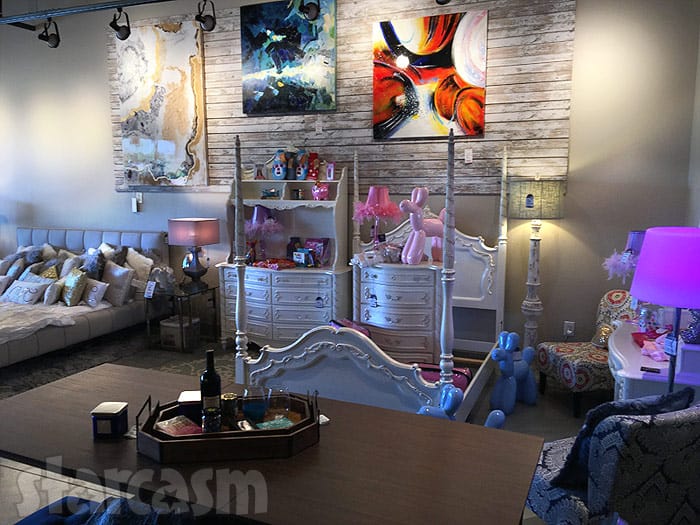 One display literally made me laugh out loud because I instantly thought to myself, “This HAD to be influenced by Simon Saran because it looks exactly like I imagine his boyhood bedroom must have looked!” Here’s a photo, which includes a luxury car bed, “HERO” pillows, a miniature T-Rex skeleton, and paintings of dogs in shirts — including a spitting image of Simon’s English bulldog Molly: 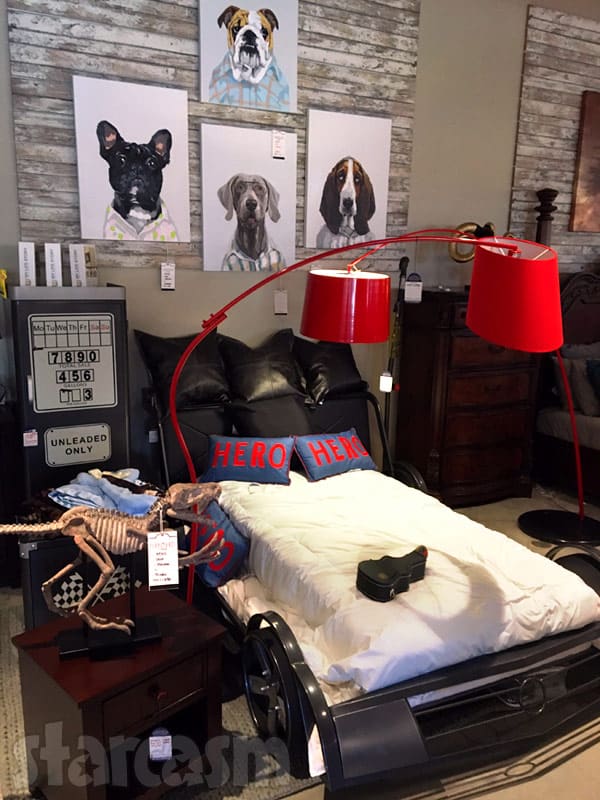 Here’s another photo of a bedroom arrangement that seems to capture the store’s hip and playful vibe: 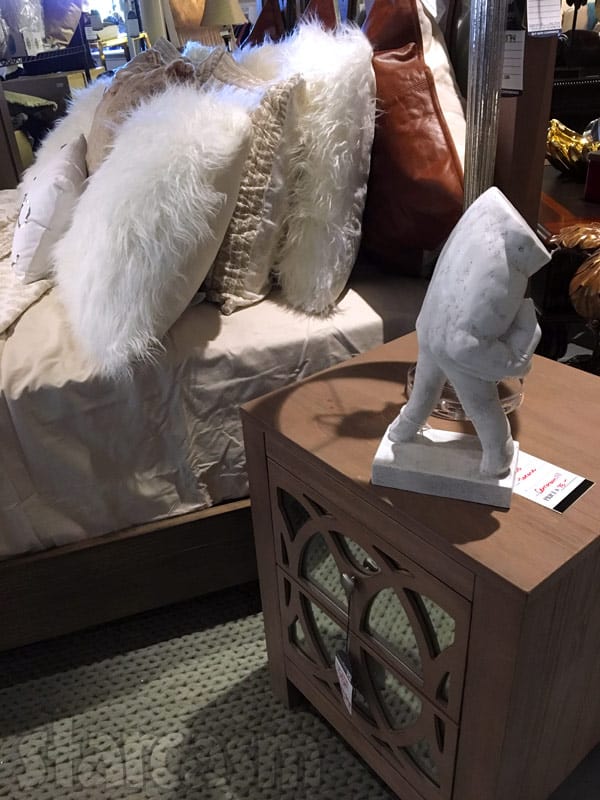 While hanging out in the front of the store sampling some JUGO Juicery juice I bumped into Farrah, and I swear I got a contact stress buzz from her! There were literal jugglers at the Sophia Laurent Children’s Boutique opening, but none of them had as many balls in the air as Farrah! There was sooooooooooo much going on between the two grand openings (did I mention the kids’ fashion show next door yet?) and it was clear that Farrah hadn’t delegated much at all. And in addition to being in charge of all the opening activities, Farrah was greeting most everyone in attendance and posing for photos. Ugh, my stress levels are going up again just writing about it.

OK, that’s pretty much all I have from the furniture store opening. Stay tuned for the recap of the Sophia Laurent Children’s Boutique grand opening with lots more photos — including Farrah and Sophia!

UPDATE – AND HERE IT IS!