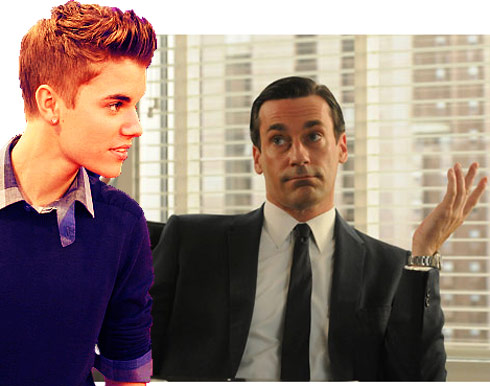 The White House recently dismissed the petition to have The Biebs deported but it looks like Don Draper wouldn’t have had a problem with the idea. The 43-year-old actor, who recently made some funny headlines when a video surfaced of him failing on a ’90s dating show, was nothing if not blunt in regards to his thoughts about J.B..

The diss came while Hamm was wondering in disbelief about the life skills many people seem to lack these days – (via D-Listed):

“Look at Bieber or whoever. You’re like, ‘What the f**k, man? What are you doing? Why?’ There’s no one telling those people no, and it’s a shame. He should have a mom or a dad or a really good friend who can say, ‘Hey, sh*thead!’ You see people in the world and you’re like, ‘Do you know how a washing machine works? Do you know how to wash a dish? Life skills are something we’re missing… just sh*t you needed to learn in life. There used to be a class that kids had to take in high school called home economics, which was cooking and sewing and just shit you needed to learn in life.”

“Bieber or whoever,” oh man! I’m not sure if ‘Merica needs more Home-Ec, but a healthy dose of Draper diatribes ain’t a bad thing.