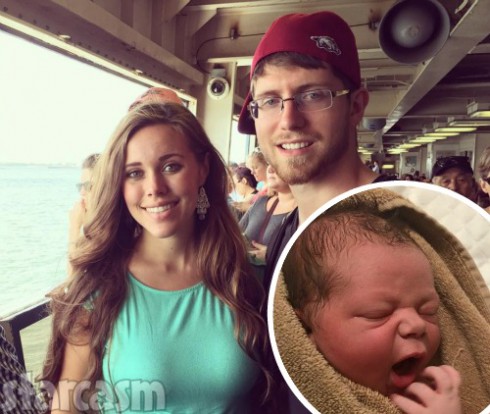 Despite having more than one dozen younger siblings, five nieces and nephews and a bunch of experience attending births, 19 Kids and Counting‘s Jessa Seewald admitted “everything was different” than she expected when it came to her own labor last week. Jessa eventually welcomed her first baby with husband Ben Seewald after 48 hours in labor, but the emergency still wasn’t over as Jessa had to be rushed to the hospital for heavy bleeding. Now that she’s recuperating at home and bonding with her baby, Jessa said she is thankful.

Jessa’s dramatic delivery began last week when she started laboring at home. “It was very intense, very long,” she said, explaining she nearly ditched her plans for an all-natural labor at home about 10 hours into the process. “I said, ‘That’s it! I’m done! I am going to the hospital and I’m going to get an epidural.’ They asked me if I really wanted to do that and I said, ‘No, I don’t, but I do.’ I wanted to try natural if at all possible.”

Even after the 9 lb., 11 oz. baby boy was born at 6:54 at night on November 5, Jessa wasn’t in the clear. As Michelle Duggar calmly explained in a 911 call, Jessa was bleeding heavily after the baby was born. Looking back on it this week, Jessa said, “I tried to keep my head, I was awake and alert.” She was rushed to the hospital, where she underwent a blood transfusion and had to stay overnight.

Jessa said the worst part of the whole process was having to leave her newborn until he was able to join her at the hospital. “I had dreamed about those first moments, getting to breastfeed right away, all that. And so when I had to go to the hospital, it was a shock,” she said. Fortunately, it all worked out and the family is three is back together. “I can’t believe he’s really ours. It is so amazing. He’s a miracle.”

After such a dramatic delivery, Jessa and Ben have taken their time picking a name for their little guy. On Monday, Jessa responded to a fan on Facebook they were still trying to “settle on a name.” By the next day, she said they were pretty certain on a first name but were still debating on a middle name. She assured fans they would share that news as soon as they decide. She added to People she and Ben want to choose “a strong name, with a lot of meaning” for their son and are gravitating toward names “of heroes from the Christian faith.” By Arkansas law, the couple has 10 days from the baby’s birth date to file a birth certificate — so they’ll need to make their decision by this weekend.

Jessa’s delivery is expected to be featured in one of the upcoming Jill and Jessa: Counting On specials airing on TLC. The first premieres next month.