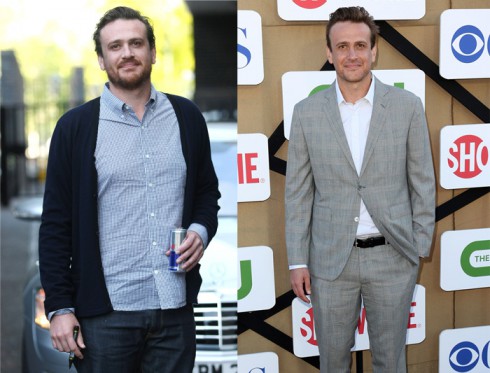 Jason Segel has shaped up recently for an upcoming role Sex Tape with Cameron Diaz. He’s been no stranger to nude scenes in the past, he got completely nude in Forgetting Sarah Marshall, but things will be a little different in Sex Tape. “This time when I take my shirt off, I’ve made a promise to myself, it doesn’t have to be funny,” he told US Magazine.

In 2011 Jason revealed his lowest moment to David Letterman. “My lowest moment came when I shot a movie in New Orleans,” he said. “New Orleans is like, the best food and booze anywhere. I really took advantage of it.”

He woke up one morning to find that his assistant took a photo of him passed out half-naked under some Taco Bell wrappers, and he vowed to change. He dropped 30 pounds that year, and it looks like his trimmed down even more since then.

BEFORE & AFTER Miranda Lambert’s weight loss, which she credits to giving up Cheetos

PHOTOS Lena Dunham’s Vogue images before and after retouching

Khloe Kardashian is “happier being heavier”