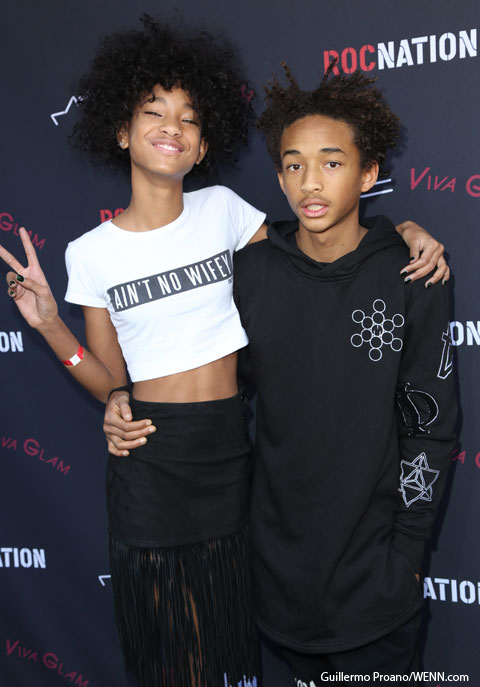 Jaden and Willow Smith are teenagers (16 and 14 respectively), but according to them, they’ve already got life figured out. In an interview with T Magazine to promote their new albums, they explain time, why they think school is pointless, and their grandiose plans for the future.

Themes in their music:

WILLOW: A holographic reality that a higher consciousness made.

JADEON: An ‘ancient text’ called The Ancient Secret of the Flower Life that can’t be pre-dated’.

WILLOW: I mean, time for me, I can make it go slow or fast, however I please, and that’s how I know it doesn’t exist.

JADEN: It’s proven that how time moves for you depends on where you are in the universe. It’s relative to beings and other places. But on the level of being here on earth, if you are aware in a moment, one second can last a year. And if you are unaware, your whole childhood, your whole life can pass by in six seconds. But it’s also such a thing that you can get lost in.

JADEN: Right, because you have to live. There’s a theoretical physicist inside all of our minds, and you can talk and talk, but it’s living.

On “duality of mind:”

JADEN: “Because your mind has a duality to it. So when one thought goes into your mind, it’s not just one thought, it has to bounce off both hemispheres of the brain. When you’re thinking about something happy, you’re thinking about something sad. When you think about an apple, you also think about the opposite of an apple. It’s a tool for understanding mathematics and things with two separate realities. But for creativity: That comes from a place of oneness. That’s not a duality consciousness. And you can’t listen to your mind in those times — it’ll tell you what you think and also what other people think.”

About the pointlessness of school:

JADEN: “Here’s the deal: School is not authentic because it ends. It’s not true, it’s not real. Our learning will never end. The school that we go to every single morning, we will continue to go to.”

WILLOW: “Forever, ’til the day that we’re in out bed.”

JADEN: Kids who go to normal school are so teenagery, so angsty…You never learn anything in school. Think about how many car accidents happen every day. Driver’s ed? What’s up? I still haven’t been to driver’s ed because if everybody I know has been in an accident, I can’t see how driver’s ed is really helping them out.

WILLOW: Breathing is meditation; life is a meditation. You have to breathe in order to live, so breathing is how you get in touch with the sacred space of your heart.

JADEN: When babies are born, their soft spots bump: It has, like, a heartbeat in it. That’s because energy is coming through their body, up and down.

JADEN: It’s prana energy because they still breathe through their stomach. They remember. Babies remember.

JADEN: By the chemicals and things, and then slowly…

WILLOW: As they grow up, they start losing.

JADEN: I have a goal to be just the most craziest person of all time. And when I say craziest, I mean, like, I want to do like Olympic-level things. I want to be the most durable person on the planet.

WILLOW: I think by the time we’re 30 or 20, we’re going to be climbing as many mountains as we can possibly climb.

Did 11-year-old Willow Smith really get her tongue pierced?