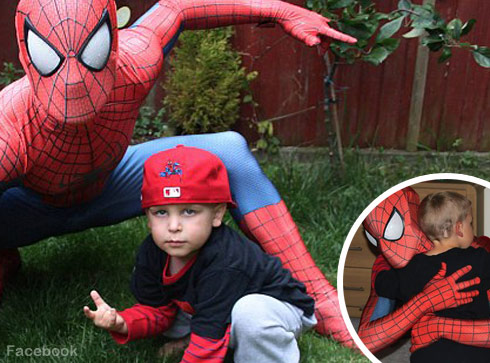 Like a lot of kids his age, Jayden Wilson loves him some Spider-Man. Like a lot of dads, Jayden’s father Mike Wilson wanted to go above and beyond to surprise him for his 5th birthday party. Mike did that and then some as his roof top leap as the comic book hero left his son speechless.

Dad caught the great moment on camera but it turns out his Spidey leap wasn’t just to surprise his boy but to hopefully bring awareness to Jayden’s recent cancer diagnosis.

I had a replica Spider-Man suit made so i could surprise my son on his 5th Birthday. Unfortunately he has been diagnosed with a Grade 4 Brain Stem Tumor with an average of 1 yr to live. I’m so proud i managed to do this for him, and secretly filmed the surprise with my Go Pro 3+ 🙂

Here’s further details about Jayden’s condition via an official Facebook page set up by the family:

On 28th August 2013 our little boy fell resulting in a bump to his head, and due to becoming unsteady on his feet, he was taken to hospital. They performed a CT Scan where unfortunately they found something. Jayden was immediately rushed to Southampton Children’s Hospital where the top Neuro Brain Specialists did an MRI Scan.

Now, I must state at this point that up and till his fall, he had NO Symptoms what so ever which is why this has been such a devastating shock to both me and his mum.
The results came back, and unfortunately the Neuro Surgeons and Specialists believe they are 80-90% certain that’s it’s a Tumour.

On the 10th September, the news that both Mike & Lou were dreading became a reality. The Neuro Surgeons, confirmed Jayden has a Grade 4 Brain Stem Tumour. With only 1 year to live. They grade tumours from 1-4 and 4 is the worst. We are so upset with how everything has gone against him, when all was going for him at the beginning. We are hoping For a miracle. He’s 4 Years Old

IM REACHING OUT TO THE WORLD FOR HOPE AND ENERGY IN BELIEVING MY BEAUTIFUL LITTLE BOY WILL SURVIVE THIS AND HAVE A NORMAL LIFE. PLEASE HELP!!!