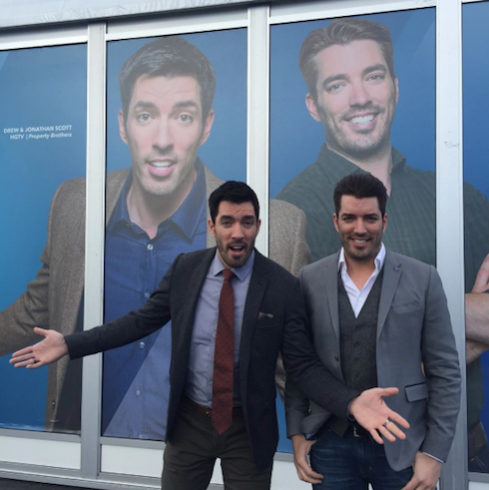 The possibility of a Fixer Upper crossover with Property Brothers (or a Property Brothers crossover with Fixer Upper, depending on your perspective) has been gaining traction over the past few weeks, thanks to a couple of well-placed social media posts from Drew and Jonathan Scott and the fan frenzy that’s ensued. Now, thanks to a curious Instagram update from Fixer Upper‘s Joanna Gaines, it looks like those fans might be getting their wish!

The idea for a Property Brothers crossover with Fixer Upper appears to have first entered HGTV’s consciousness way back in January of 2015, while Drew and Jonathan’s brother JD filmed his web show HGTV Insider with a rotating crew of the network’s personalities. Joanna and Chip Gaines were shooting the second season of Fixer Upper, and, by all indications, had a marvelous time with the third Scott brother–as evidenced by the photo Jonathan shared on Facebook: 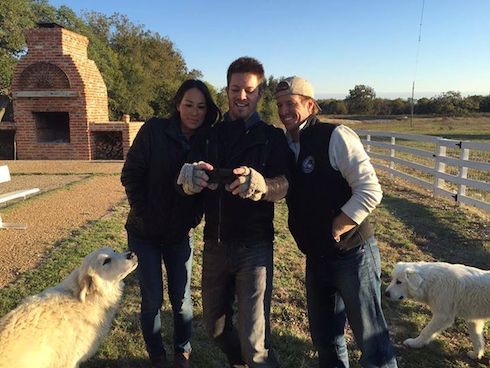 Jonathan captioned the photo with the following: “Who’s watched the first episode of JD Scott‘s new HGTV.com series, #HGTVInsider?? He’s taking you behind-the scenes of your favorite HGTV shows, and first up is “Fixer Upper” with our friends Chip Gaines and The Magnolia Mom 🙂 http://www.hgtv.com/shows/hgtv-insider/video-playlist/hgtv-insider-fixer-upper”

From there, the idea of a crossover gained slow and steady steam. And, when the just-airing second season of Fixer Upper turned that show into one of HGTV’s biggest hits, the premise of the crossover question got flipped: fans started wondering if and when a Fixer Upper crossover with Property Brothers might take place.

That led to another, more public statement from Jonathan Scott, who decided to harness the power of social media for semi-scientific purposes:

Who should do a @PropertyBrother crossover episode with? Vote & Share

It might be worth pointing out that Jonathan left two of HGTV’s most popular personalities–Tarek and Christina from Flip or Flop, and Nicole Curtis, of Rehab Addict fame–off of his poll. Was it to skew the votes in favor of a Fixer Upper crossover? No one can say for sure, but that’s definitely what happened:  68% of respondents chose the Texans. And, judging by Twitter’s reaction to Jonathan’s already-popular poll, a Property Brothers crossover with Fixer Upper would be a slam dunk:

@MrSilverScott @PropertyBrother it would be so awesome Jon Silver to do with Chip and Joanna Gaines ?

@MrSilverScott @PropertyBrother it would be awesome…Tho I’m not sure if the world is ready for you and Chipp together ???? — Ana  (@butterfly_1005) December 6, 2015

Now, further fan speculation about either a Fixer Upper crossover or a Property Brothers crossover is getting stirred up by Joanna Gaines’ most recent Instagram update, which she dropped earlier this morning:

Only 2 more days until Chip and I get to announce a really big project we’ve been working on! Hint: it’s not a house ?