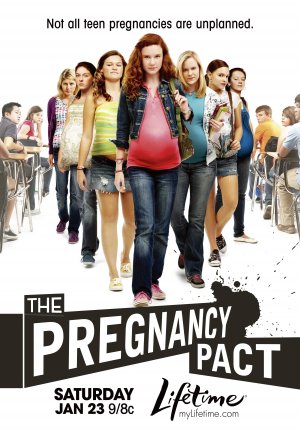 Lifetime‘s movie “Pregnancy Pact” premieres tonight with a storyline ripped right from the Gloucester, Massachusetts headlines. The storyline involves a gaggle (about 18) teenage girls making a pact to get pregnant in high school.

Back in 2008 Gloucester High School in Massachusetts had a similar number of young girls (17) get knocked up, about 4 times higher than the year before and the circumstances around the situation were pretty suspicious. For one thing, they were all lining up at the nurse’s office to see if they were pregnant, and celebrating when they were. When they weren’t, they’d appear to be sad. One girl was allegedly so desperate to fit in with the crowd, she got impregnated by an twenty-something homeless dude.

TIME was the first to break this oddball story, and everyone rushed to blame the movie Juno and Jamie Lynn Spears for this mess.

Thankfully, MTV took the opportunity of this teen pregnancy buzz to create some truly brilliant shows (16 & Pregnant, and Teen Mom) that help teens and adults understand more about teen pregnancy, and hopefully help convince some kids to abstain or at least slip on a condom. These show also help teens and young adults who already have children feel that they’re not alone. All that, and they bring the drama too.

I doubt Pregnancy Pact will help many people, but it does look like a delicious guilty-pleasure Lifetime movie, but it does have Thora Birch as an investigative teen blogger who makes a mission of discovering the truth behind the pact.

The principal and superintendent of Gloucester High rushed to publicly deny any knowledge of a pregnancy pact, even after talking candidly to TIME about the strange girls’ strange behavior. Around that time the director of the Gloucester High Health Clinic, Dr. Brian Orr, stepped down over a controversy about handing out condoms to teenagers. Dr. Orr wanted to provide birth control solutions to teenagers and educate them realistically about sex. His opponents, who wished to teach teens abstinence only, won out, but Dr. Orr opened up a pediatric clinic down the street which provides teens the services he wanted to provide at the school clinic.

There are many excuses that adults bring up–mostly fabricated–to make an excuse for not doing something about teen reproductive issues. Gloucester overcame that to get where we are today, but my hope is that other communities are able to do the same thing without dragging the issue through the mud.

Here’s a video explaining the 2008 scandal:

How is Orange is the New Black based on a true story?