Tonight, the Lifetime Movie Network takes a stab at the made-for-TV horror movie genre with House of Darkness. Billed as being “inspired by true events,” House of Darkness tells the story of a young couple and their daughter who leave their big city San Francisco life behind and relocate to a rural California farmhouse in hopes of finding some serenity and rebuilding their relationship. As you probably guessed, the farmhouse turns out to be severely lacking in the serenity department as the trio become the latest victims in a string of dark tragedies that have cursed the house for nearly 100 years.

When I first began researching the inspiration(s) for the movie, the most obvious connection was the home featured in the 2013 movie The Conjuring and its sequel, The Conjuring 2, due to hit theaters on June 10. That story was told in a series of books by Andrea Perron, the first of which is titled House of Darkness: House of Light- The True Story, Vol. 1.

However, The Conjuring house is clear across the country in Harrisville, Rhode Island! Alone, it doesn’t really seem to fit — but when you combine it with another story actually set in California, I think we get closer to an answer. 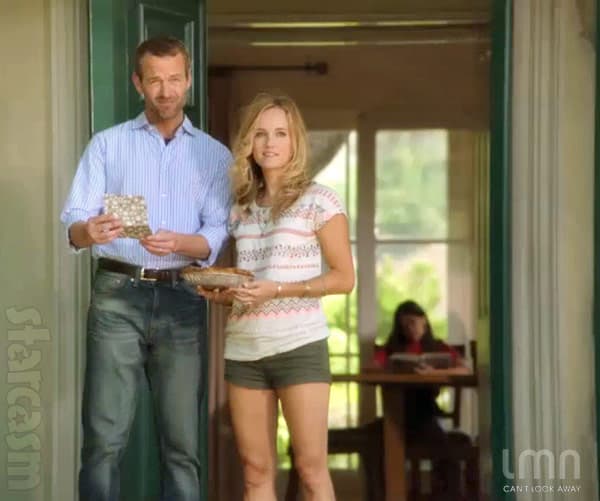 ^ Actress Sara Fletcher as Kelly and actor Gunner Wright as her husband Brian in House of Darkness.

The opening scene in House of Darkness features a flashback to 1957 when four costumed kids approach the spooky looking two-story home on Halloween night. Two children chicken out, but the remaining two cautiously approach the door and knock. When the camera pans behind a large tree and reappears, the two children are gone and we hear a distant scream.

Fellow Lifetime Movie researcher Traciy Reyes at Inquisitr ran across a rather famous murder that took place in California on Halloween night in 1957. That case, referred to as the “Trick Or Treat Murder,” also involved a bad relationship, jealousy, and murder — but that’s pretty much where the similarities end.

Here’s a recap of the “Trick Or Treat Murder” from the True Crime, History, Nature & Oddities Facebook page:

So essentially, a love triangle involving a married couple and the wife’s lesbian lover resulted in the Halloween night murder of the husband, Peter Fabiano, by a costumed female friend of the lesbian mistress. So, like I said before, the connection between this story and House of Darkness are pretty thin — by itself. (You can find out more about this case from The L.A. Times and The New York Daily News.)

So it seems the best answer to the question of what true events inspired LMN’s House Of Darkness would be a mix between The Conjuring and “The Trick Or Treat Murder” from 1957.

If you know of something we’re missing, please let us know by sending us a message at starcasmtips(at)yahoo.com!

Meanwhile, be sure to check out House Of Darkness premiering tonight (April 17) at 8/7c on the Lifetime Movie Network!