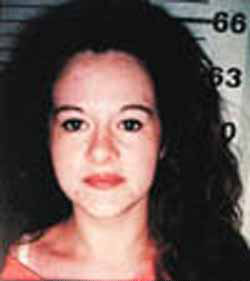 This should be the entry in the dictionary under “crazy love.”

Donald Kohut, a 34-year-old physical trainer from Flemington, New Jersey, was one of many men corresponding with one of the U.S.’s most dangerous women, Christa Pike, but he was the only one willing to develop a plot to help her escape from death row.

But the plot, which involved bribing 23-year-old prison guard Justin Heflin, didn’t get past very early stages. Kristin Helm, spokesperson for the Tennessee Bureau of Investigation told reporters “We thwarted it in its infant stages. It would have been nearly impossible to carry out.”

Officials discovered the plan this January, and now both Kohut and Heflin have been charged “with bribery and conspiracy to commit escape.” Kohut would visit Christa twice a month, and send her tons of love letters, including one where Pike intimated “I want to lick your soul.” Kohut allegedly bribed Heflin with a canoe and a Gibson guitar. They also planned to copy prison keys. Heflin would make tracings of the keys, but other guards found the tracings in Janaury before they could get the duplicate keys made.

In 1996 18-year-old Christa and her boyfriend Tadaryl Shipp brutally and sadistically tortured Christa’s love rival, Colleen Slemmer, who Christa thought was trying to steal Tadaryl away from her. From the events that transpired, Tardaryl WAS interested in Colleen, at least his was interested in watching her suffer and die.

Here’s an account of what Christa and her boyfriend did to a young woman who may have flirted with her boyfriend written by reporter Will Kern (full story here):

“Pike began accusing Miss Slemmer of trying to sleep with her boyfriend.  The girl denied it, Pike became outraged and kneed her in the face. She pulled out the meat cleaver and sliced Miss Slemmer’s stomach, then Shipp jumped in and gashed her across the chest.

The victim begged her to stop, but her cries fell on deaf ears. The box cutter came out, and the three others tortured Miss Slemmer for the next 30 to 40 minutes, stabbing and slashing her hundreds of times. Eventually, the three got bored with cutting, so Pike and Shipp held her down and carved a pentagram, the mark of the devil, in her chest with the meat cleaver.”

At the age of 20, Christa was the youngest woman to ever be sentenced to death, and she’s been on death row for 16 years (she’s now 36, and the only woman on death row in Tennessee right now.) To pass the time, she’s acquired a number of romantic penpals, and some of her love letters, and even her used panties, are being sold on a creepy website called Serial Killers Ink. Christa recently become desperate because all of her appeals had run out, making her execution imminent, so the plot to escape was her last effort to avoid death.

In 2001, Christa tried to kill again, by attempting to strangle a fellow inmate Patricia Jones with a shoestring. Here’s her mug shot from that charge: 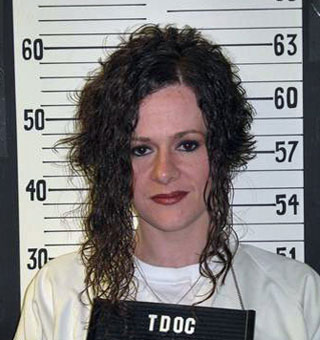 GMA has an interview with another one of Christa’s paramour, click here to watch.