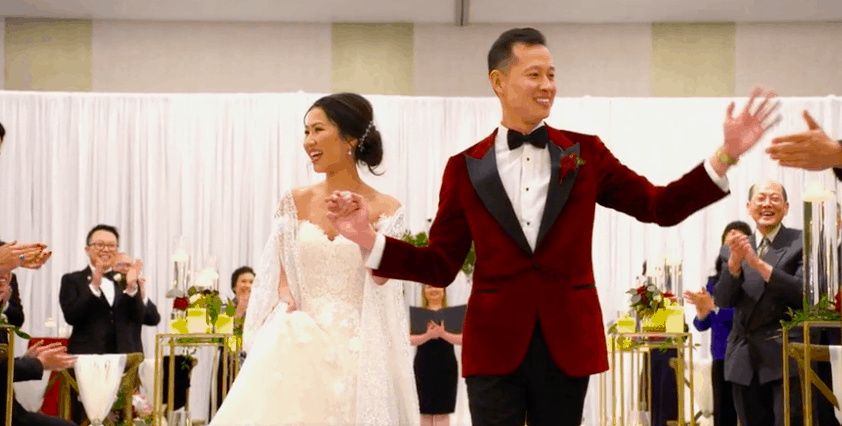 Bao and Johnny, the first couple to get married on Season 13 of Married at First Sight had actually met a decade before! They didn’t know each other very well, but this may be a first with this unique social experiment series.

How did Bao and Johnny meet?

“She gorgeous, beautiful, hot, sexy, everything I’ve been looking for,” Johnny says of Bao when he saw her walking down the asile. “I was so nervous, but when I saw Bao all of those jitters went away because I knew who she was.”

The two had met when they were still in college ten years ago. They actually didn’t attend the same university though, but they were both presidents of their respective schools’ Vietnamese Students Associations at the same time at different Texas universities. They met during cross-events as a “presidents meeting presidents type of thing.” At the time Johnny thought Bao was “very bubbly, very energetic.” He didn’t pursue her romantically because he wasn’t looking for a commitment at the time.

Bao reveals that in college Johnny had a “reputation of being a little bit of a playboy.” Thankfully, she understands why he was so popular with women. She says that he’s handsome, suave, dresses well, and has a way with words.

Johnny tells Bao that the situation is awkward because he knows who she is, but that also makes him feel more at ease. “It’s kind of cool,” Bao agrees.

“I know you’re a good person,” he says. Bao says that she understands why they were matched. “Johnny actually has many layers, and yes, he does like sports, but he can dig deep,” she explains.

Bao says she sent them a long list of exclusions of her exes and other people she’s known, but she didn’t include Johnny on that list.

Johnny asks her if she thinks that’s a good or a bad thing, and she says she thinks it’s good.

He does find it weird that they never considered dating each other before, and now they’re married. He then asks her if she’s ever seen him on dating apps before, and if she’s swiped left on him.

She says she has, and she has never swiped left, which would mean rejection. “I’ve always kept you in the list of ‘maybes’ on all of the apps,” she says.

Why Bao and Johnny almost didn’t get married

Johnny almost ruined his chances with Bao before the wedding even occurred thanks to his choice of gifts. Before their wedding, the bride and groom opened gifts for each other, and Johnny’s gift for Bao was a huge turn-off for her. THe night before the wedding, Bao shared her hopes that her future husband would be “nerdy.”

He gave her two sports Jerseys. When she unwrapped the sports jerseys, she feared that he would be the opposite of what she wanted in a spouse. She wanted a husband who was into intellectual pursuits instead of sports and definitely didn’t want to marry someone who put sports as such a priority in their life that they would give sports-related gifts to their unknown future wife.

Thankfully, she had met Johnny before and knew there was a lot more to him that being a sports fan.

Dr. Pepper Schwartz thinks that Bao and Johnny, who are both 35, are a “natural match. They are both ambitious, sharp-witted intellectuals and their devotion to family will create a strong bond.”

After the traditional tea ceremony, they get back into their wedding clothes for their first dance together. During the dance Johnny and Bao discuss starting a family. They both want kids, so Johnny asks Bao how many she wants. She replies “no more than two,” and Johnny says that’s fine with him.

During the dance Johnny notices that Bao is still a little stiff with him, so he says he’s making an effort to be gentle and careful where he touches her. He wants to kiss her, but is holding back.

UPDATE: In episode 3 Bao revealed that she has had a crush on Johnny since she first met him in college, but she didn’t act on it at the time. “I’ve always been a coward about those things, so I just left it.”

The morning after their wedding in episode 4, Bao asked Johnny if he remembered that they have each other’s phone numbers. Bao says he asked her out 10 years ago and she thought it was a friend thing, but Johnny was flirty so she was confused. Johnny doesn’t remember, so Bao pulls their texts from the time up on her phone and texts Johnny. Johnny doesn’t have any of the messages saved because he says he deletes messages after a year.

Bao reads through the messages and realizes that at some point Johnny just stopped replying to her. “I got ghosted by my husband!” she exclaims after understanding what happened. Johnny apologizes for his previous self and promises that “2021 Johnny is gonna make up for it.”