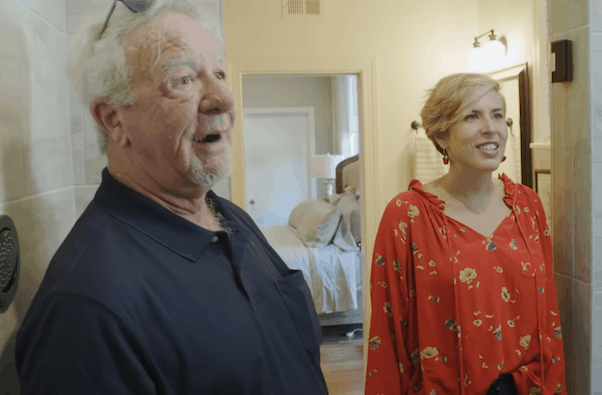 One of the most colorful and memorable people to ever cross paths with Erin and Ben Napier has sadly passed away. The Home Town John Combe episode now unfortunately doubles as a goodbye to the 70-year-old John, who moved to Laurel after spending a decade in Belize and a lifetime globetrotting before that.

John made an immediate impression with viewers for being the first participant in Home Town history to give the Napiers an unlimited budget. (In fact, I’m pretty sure he’s the first person I’ve ever seen do this on *any* home renovation show.) “The sky’s the limit,” John said in an on-camera interview, shrugging away Ben and Erin’s disbelief and giving the Home Town John Combe episode its official title.

But John’s episode also featured a highlight reel of memorable moments. He dropped Home Town‘s first-ever s-bomb when the first look at his new master bathroom shocked John into saying “Holy shit!” John also dubbed his new shower — the biggest one Erin and Ben had ever done — the “party shower.” He broke down into tears by episode’s end, saying he was overwhelmed by the Napiers’ work and kindness. When Erin compared John’s new back patio area to the beachside comfort he’d known in Belize, John one-upped her, saying “I think it’s heaven.”

After word of John’s death spread just a couple of months following that episode’s debut, Erin wrote a tribute to the man on Instagram. She also took the opportunity to share a few behind-the-scenes photos of his home’s finished renovation in the process. You can read Erin’s tribute in its original form here; we’ve copied the text verbatim below:

Though we only had the pleasure of knowing him for a few short months, we are heartbroken to tell you that our friend Mr. John Combe from one of our favorite episodes of all time passed away on April 4 here in Laurel. He squeezed every last drop out of life, and I’m honored we got to help make his last earthly home such a special one. Even the biggest, most generous hearts don’t beat forever, and his will be so missed. ❤️ #HGTVHomeTown

Although there doesn’t appear to be an official Home Town John Combe obituary online, several sites list John’s date of birth as May 23, 1949. In keeping with his super-chill persona, John’s still-active Facebook page lists his occupation as “Lazy,” and his location as “Retired on veranda.”

And the Laurel Mercantile’s blog post for John’s Season 4 Home Town episode also featured an inadvertent tribute to the man. “John’s main focus,” the post reads, “is to live out his best days here in Laurel, in his home ‘loving it’ and staying poolside as much as possible. We’re really glad you’re in the neighborhood, John! Let us know when the patio is ready for visitors.”

You can revisit “The Sky’s The Limit,” the Home Town John Combe episode, on the show’s official site.

Home Town’s Erin Napier may have had & recovered from coronavirus