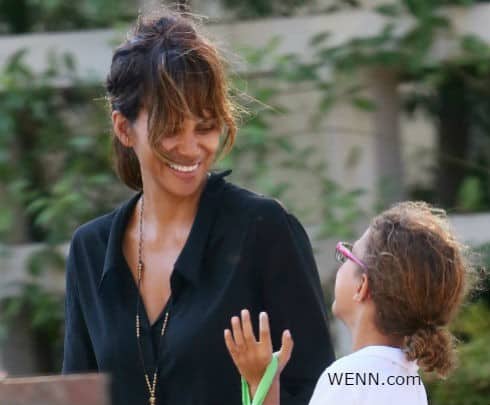 Halle Berry has had enough of her fans questioning why she doesn’t show off her kids on social media. The Oscar winner posts pictures of Nahla,8, and Maceo,3, from time to time but she never shows their face. Apparently, she’s been questioned about why she doesn’t show them off so many times that on Wednesday, Halle decided to finally respond.

In the comments section, a fan said, “What’s with the hiding of the faces? They’re beautiful children why not show them off?” Halle responded directly to the fan, who she says has asked many times about why the actress never shows her kids’ faces when she posts pictures of them. “I’ve noticed you have said this several times now so let me be clear — I’m not at all ashamed of my children,” Halle wrote. “I try to find creative ways to incorporate them into my feed because they are the biggest part of my life, but I also work very hard to keep their identities as private as I can considering they are only children. It’s my belief, and I’m not criticizing others who have different beliefs, that it’s my job as their mother to protect their privacy as best I can. When they grow and they’re of age and they want to share their images on the internet, that will be for them to decide, not me. Feel me? Have a beautiful day.”

The comments that followed were mostly supportive of Halle and her decision not to put tons of pictures up of Nahla and Maceo. While it’s true that we all know what they look like thanks to the paparazzi, it’s also true that some famous parents are still careful about exposing their kids by posting their mugs all over the internet.

The original commenter did come back after several fans called her out for having an opinion. “@halleberry doesn’t think badly of me or she would’ve blocked me and I wasn’t being negative in the comments, just stating my opinion and she stated hers which I respect and have always respected,” she wrote. “I stand on my position I want to see more of Halle Berry I love her more than any of you out there otherwise you wouldn’t be satisfied with not seeing a lot of her.”

Touche’ internet troll. Halle Berry’s kids really are cute and we can see about half of their adorable smiles in the picture that she posted. However, it’s totally up to her to post whatever she wants on Instagram and also keep in mind that Halle is watching those comments!