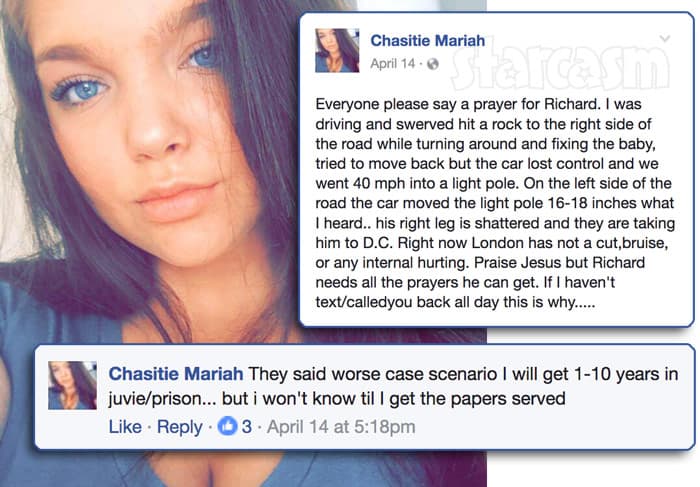 Gypsy Sisters star Nettie Stanley’s 15-year-old daughter Chasitie Collier was involved in a serious car accident in West Virginia on Friday when she lost control of the vehicle she was driving and crashed into a light pole. Two children she was babysitting were in the car at the time, one of which had to be taken to a D.C. hospital for a broken leg. Nettie’s infant granddaughter London was reportedly unharmed.

According to an online emergency response site, the accident happened on Nadenbousch Lane just before noon. Chasitie, who suffered minor injuries in the crash, let her Facebook followers know exactly what happened soon after the accident:

Everyone please say a prayer for Richard. I was driving and swerved hit a rock to the right side of the road while turning around and fixing the baby, tried to move back but the car lost control and we went 40 mph into a light pole. On the left side of the road the car moved the light pole 16-18 inches what I heard.. his right leg is shattered and they are taking him to D.C. Right now London has not a cut,bruise, or any internal hurting. Praise Jesus but Richard needs all the prayers he can get. If I haven’t text/calledyou back all day this is why…..

Richard’s mother Madge also posted on Facebook asking for prayers for her son: “My baby boy richie was in a car accident this morning with a chavie driving… Please pray that hes okay and that the muskers don’t take him from us….” (“Chavie” means “child” and “muskers” means the police.)

Chasitie later updated on Richard’s condition by revealing that his leg “was broken in 2 places,” before adding “they popped it back in place he is home now.. trying to recover.”

Dallas also asked for prayers after revealing Richard was back home recovering:

Can everyone keep my fave lil man Richie in your prayers & pray for a fast recovery! He is home and safe now but he was in an accident and had broken his leg! He’s one of the most out going little kids I know and it breaks my heart ♥

When asked about her own injuries, Chasitie wrote “My head went thru the windsheild [sic] and I have a couple cuts and bruises I have the air bag rash.” This weekend she updated her condition, saying “I’m sore from head to toe today.”

I’m sure a lot of you have a lot of questions about why a 15-year-old was driving two children without an adult present, and this is where the story gets complicated — as is almost always the case with Gypsy Sisters stories.

Chasitie was at her sister Dallas’ house and was left to babysit Richard as well as Dallas’ newborn daughter London. Dallas and Richard’s older brothers Rowdy and Billy had left, reportedly for work. (Numerous gossip sites report that Dallas and Chasitie are dating Richard’s older brothers — at least one of whom is married.) Chasitie was either headed to the store or to a friend’s house(s), according to varying sources, when she crashed into the light pole.

After news broke about the wreck, some commenters were quick to blame Chasitie for her bad decision making, but Nettie Stanley responded by pointing the finger at Dallas. She also reveals that Chasitie visited several people, none of whom called her to let her know that Chasitie was driving around without a license.

I will say this once…don’t blame My kid being left to watch other grown ass mothers kids! Keep your own kids and no one would’ve had this problem!!!! My kid has never drove never had to watch kids in her life! She was never put in a situation to have too!

Let me rephrase the previous post…my daughter chasitie has never drove and not allowed so with dallas leaving her with her daughter and kids will be kids if there’s keys and money! But she visited a few people and not 1 called me and knowing my kid isn’t allowed to drive and even worse drive with a baby and a kid! You think anyone of them would’ve made a call and this could’ve never happened and if not for me having Ritchie for the past week, he would’ve been in that car too!

That inspired the diligent Gypsy Sisters community to dig up this photo of Chasity driving with her learner’s permit: 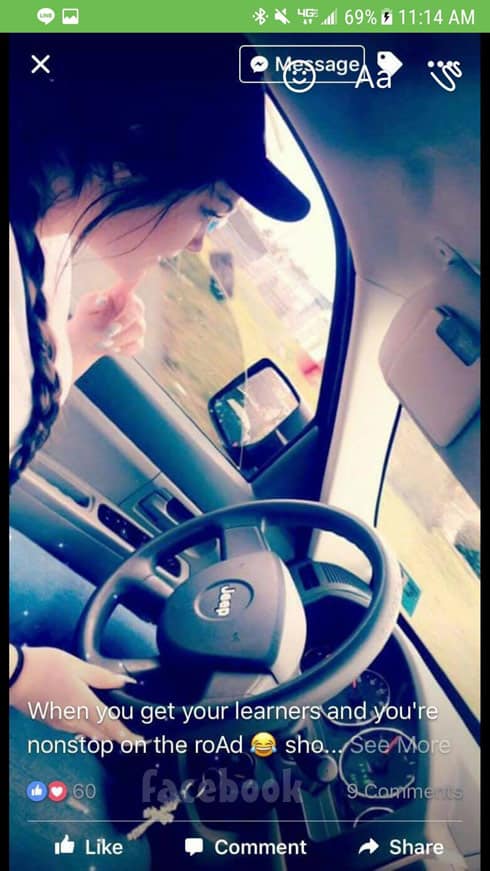 It should be pointed out that there is obviously someone in the car with Chasitie while she is driving; I assume it is an adult.

It’s unclear exactly what the legal ramifications of the accident will be Chasitie, Dallas, and the adults involved. Chasitie posted on Facebook Friday afternoon that she was told the penalty could be quite severe for her. “They said worse case scenario I will get 1-10 years in juvie/prison… but i won’t know til I get the papers served,” she wrote. She later revealed “Yeah I’ve balled my eyes out all day I’m so scared.”

It seems the fear has subsided a bit, though, because Chasitie was back on Facebook this weekend sharing memes and even a selfie in which she is seen getting mighty intimate with a fella I believe is named Billy — who is probably Richard’s older brother? 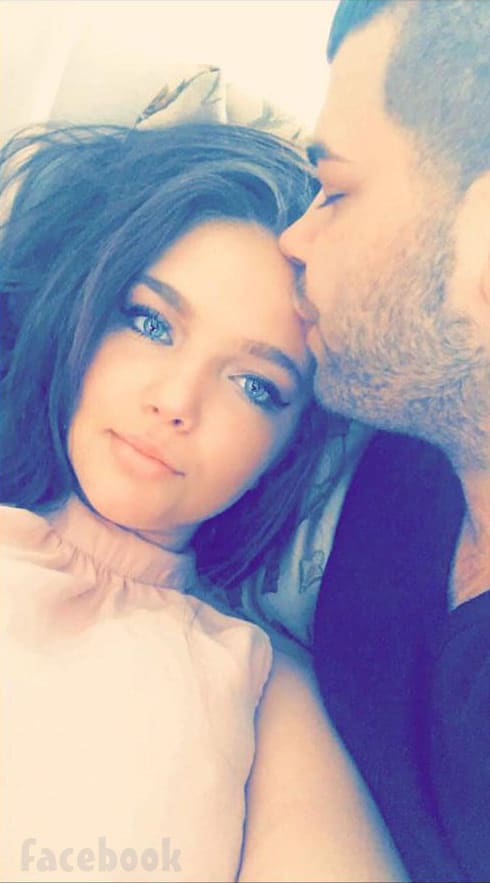 We certainly wish Richard a speedy recovery, and we hope Chasitie (as well as the other adults involved) have learned a valuable lesson(s) about responsibility.

VIDEO Gypsy Sisters renewed for third season: What to expect