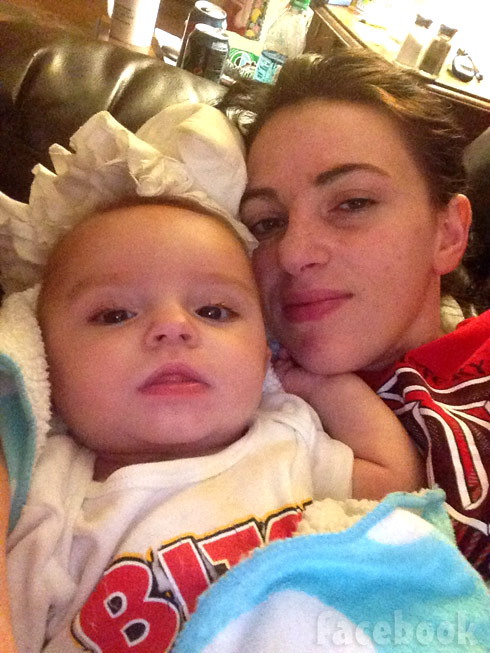 One of reality TV’s most volatile stars will be having to take a few months off from partyin’ and kit shickin’ as Gypsy Sisters hell raiser Mellie Stanley is pregnant again! Mellie revealed the big news on Facebook last week with her usual directness by writing simply, “Well I Am Expecting Baby #2…”

The post generated a number of congratulations as well as questions for the 25-year-old reality star, who gave birth to son Richard Joe Whetzel Stanley in June of 2013. (That’s Mellie and her son in the photo above from back in December — you can see more pics of mom ‘n’ lil Richard HERE.) “How far are you?” one fan asked. Mellie responded with, “I’m not sure I just found out in the emergency room.”

When asked who the baby’s father is, Mellie wrote, “Nick.” 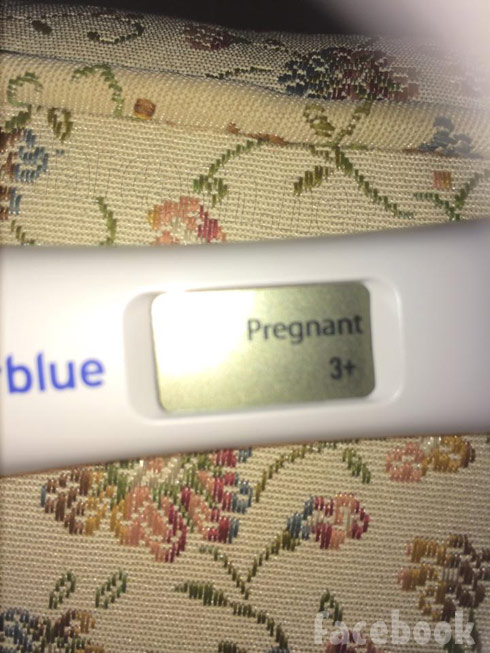 Mellie later posted a Clearblue pregnancy test photo (above) with a display that reads, “Pregnant 3+” Mellie confirmed in the comments that the 3+ means three plus weeks. Another commenter asked bluntly, “Is the Daddy going to be there for you & the baby?” and Mellie replied, “Yes.”

When asked why she needed to take a pregnancy test after already finding out she was pregnant at a hospital, Mellie said she got it as a keepsake.

As you may have guessed from Mellie mentioning that she was in the emergency room when she first found out she is expecting again, her pregnancy is already a difficult one. “Why can’t I just have a normal pregnancy?” she asked on Saturday. Among the sympathetic responses was a follower who wrote, “I feel yah. I have hypermesis so bad I have to go to the hospital to re hydrate via iv every week or so. Hang in there.” Mellie responded to that comment by revealing she was having identical issues. “Same here,” Mellie wrote, “I just was admitted.”

Mellie later added that she was feeling extremely weak and although she was taking her medicine and drinking lots of Gatorade, nothing would stay down.

We’d like to say congratulations to Mellie, and also send her our well wishes in hopes that the remainder of her pregnancy will go a little smoother.

In case you missed it, TLC recently announced Gypsy Sisters will be back for a third season, so fans will more than likely get to see Mellie’s pregnancy struggles first hand and get to meet the newest cast member upon his or her arrival!

One thing fans won’t be seeing on Gypsy Sisters Season 3? Sheena Wells! Click here to find out her reason for not coming back!