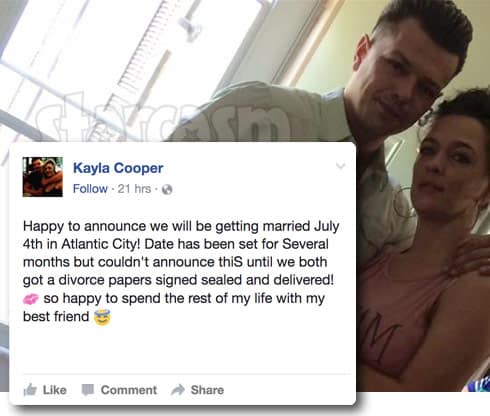 It looks like another big fat American Gypsy wedding is in store for Gypsy Sisters star Kayla Williams! Kayla–who goes by Kayla Cooper now–announced on Facebook yesterday that she and her fiance, Douglas Cooper, will be officially tying the knot on July 4 in Atlantic City. She revealed that the date has been set for a while, but both she and Doug were waiting for their divorces to be finalized.

“Happy to announce we will be getting married July 4th in Atlantic City!” Kayla captioned the full-length photo below with her hubby-to-be. “Date has been set for Several months but couldn’t announce thiS until we both got a divorce papers signed sealed and delivered! ? so happy to spend the rest of my life with my best friend.” 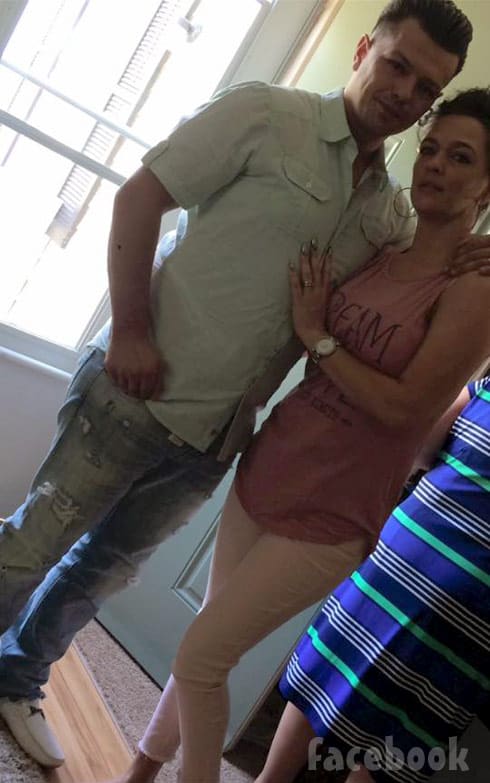 Last week Kayla revealed that her and Doug’s divorces were official:

I don’t normally post my life on Facebook but I can’t help but share my divorce took place yesterday morning my mans was still ongoing got a call his divorce was signed just moments after mine !! Tell me it wasn’t meant to be ?? needless to say we deff had a big celebration last night and will bring the weekend in right! We also just signed a lease on our new place days before our divorces!! My life fell n gods hands and he’s sure put me on a great path

The divorces went through just before Kayla’s birthday, and she posted this appreciative response to a commenter who pointed out how great her life is going:

Yes it’s just so weird how everything just went all n our favor least expected! I’ve gttn bck to myself n now we’re joining the church near our place that’s the only thing I’ve been missing n my life but we both said we’ll find a place join a church n just continue to grow with god!!!! I’m very blessed all the way around;) and thankful

So, can we expect to see Kayla’s wedding on TLC? “Absolutely not,” Kayla wrote in response to that question on Facebook–along with an “lol.”

There are a few bumps in the road to the couple’s happily ever after, however, as Doug is having custody issues with his ex-wife. He made a series of posts under Kayla’s Facebook account over the weekend in which he described his struggles in detail, including numerous screen caps of text message conversations with his ex and others in which he tried desperately to at least see Easter photos of his kids:

It’s sad today is Easter and I’ve contacted Audrey crystal and Greg not one of my kids family would send me a single pic of my kids but there in church every Sunday and tell people I’m no kind of a father! I’m no saint and I no no one is perfect but for 7 months I have begged to be in my kids life prior to those 7 months crystal was driving an hour one way just to meet me but now that me and kayla are in a serious relationship she’s cut me off with my kids n tells people I’m a dead beat I’ve not said anything because I love the lord and they claim to be Christians but no more will they call me a no body I have message for 7 months straight to prove my innocence and a court paper proving to my kids how she wrote all kinds of lies to a judge to get my kids but all I have left to say is ive printed every message and court papers to show my kids when they get older that it wasn’t there daddy it was the mother 100% and that she will deal with one day with my kids and god himself.

Kayla later addressed the issues Doug was having with his ex:

Doug and I have just decided to pray about this situation and leave it god! We both no his girls will grow up and they do no there father n with that being said we’re sure some day they will reach out to him and when they do he will have his chance to show his girls he did and does love them but with her having custody she’s using that against him completely unless she gets n a relationship and Doug can go right through him I guess! He can go to sleep at night knowing it’s nothing he’s done it’s the choices she choose I guess! But with god all things are possible I myself just couldn’t walk n a church every Sunday n praise god knowing there’s many things that she needs to work on god doesn’t like ugly so this is now between her n him!

Congratulations to Kayla and Doug! Even though we won’t be seeing their wedding on TLC, we look forward to seeing the photos on social media!