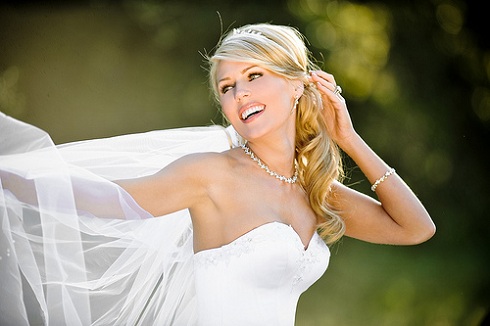 Gretchen Rossi and Slade Smiley have been together for several years now, but for numerous reasons (as addressed onscreen on The Real Housewives of Orange County), the couple continues to balk at taking the next big step and committing to walking down the aisle together. Now Gretchen is revealing that the couple may be turning the age-old rhyme “First comes love, then comes marriage, then comes baby in a baby carriage” on its ear as she announces the two are trying to have a baby!

“We’re working really hard right now to have a baby. He actually has a vasectomy so he has to get a reversal and we have to kind of figure that all out,” Gretchen tells OK! Magazine. “The scoop is we are taking the steps to try to have a baby. If that is the path we are taking there should be some sort of commitment and I don’t know when that is going to happen and who is going to ask who.” 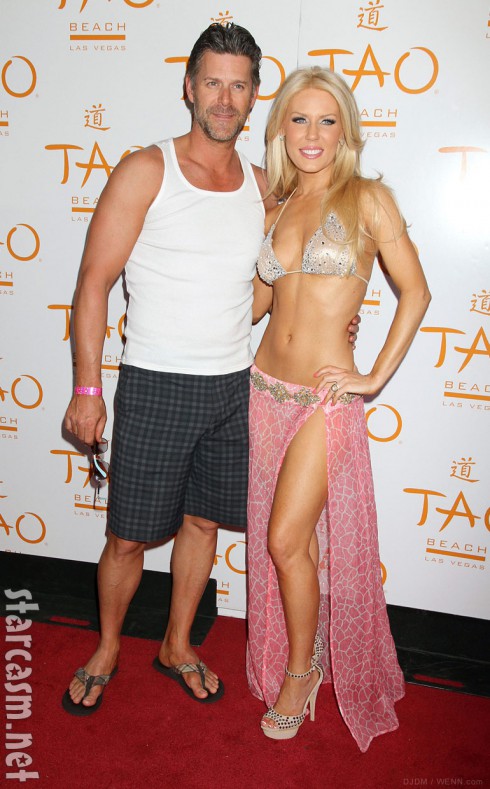 Fans may remember seeing Slade pick out an engagement ring on an episode of Real Housewives of Orange County, but after finding out that Gretchen wasn’t ready to make that commitment at the time, he backed out of the proposal. Now, after months have passed, Gretchen is in a different place and has even considered doing the proposing herself!

“I might not [ask him to marry me], but I’m just saying you never know,” she explains. “I kind of have a wild hair up my ass. I’m just saying a guy doesn’t always have to do it. He can still do it, but maybe I might too. I don’t know, but if [he] doesn’t something soon, I might have to!” That would amazing to see. Hopefully, if Gretchen does go that route, she’ll wait until the Bravo cameras are around so fans everywhere will get to experience that moment as well.

In other Rossi news, the always busy Gretchentrepreneur just announced she is working on her own swimwear line! Yesterday she tweeted, “Headed to my first design meeting for my collaboration with Luxe swimwear to create some Gretchen Christine designs! Send me your ideas!” If you’re a frequest reader of starcasm you know how much we love Gretchen and bikinis! Our suggestion would be more sparkly patriotikinis!

And speaking of Gretchen Rossi and bikinis, she is featured in the current issue of NW Weekly frolicking about in next to nothing, looking great, and talking about having cellulite (where?) and being fine with it. She shared this photo of her spread on her blog along with a snippet of her interview: 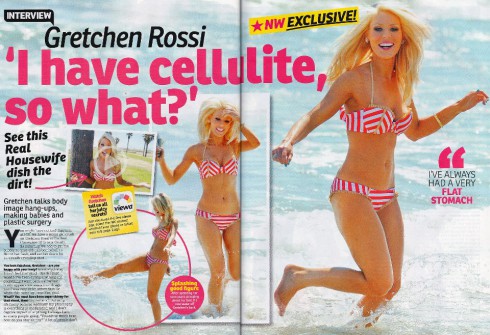 To my friends from the land down under, please pick up the December issue of NW Magazine out Dec. 15th for an exclusive interview about body image, plastic surgery and living healhty! Here’s a snippet:

NW: What’s your routine?
I travel so much and do so much for my work, so my golden rule has been any time that I can do it, so literally I will be watching TV and I’ll do 50 sit-ups or push-ups or my leg lifts. I take my dogs to the park almost every day and I’ll do lunges in between running him around a gigantic football-field size park. When I’m in a hotel room. I’ll pick up a lamp and do bicep curls, so I’m never idle.

NW: You’ve had major eating problems in the past…
In high school, I definitely had body image issues. I think as a young girl, you want to be seen as something beautiful and sexy. I never really was fat per se, but I was a sports girl so I had a lot of muscle. This is going to sound strange, but I actually tried to be anorexic for a day and I couldn’t do it – I just can’t live my life not eating. It didn’t work for me, so I was like, “OK I’ll eat whatever I want and then throw it up,” and that was the path I took.

NW: How did you overcome it?
I did it for about a year until my best friend busted me in the bathroom and called my parents. I was really lucky – I could have headed down a prety scary road. Already my skin had turned yellowish-grey colour, my hair started falling out, and my nose started to get really grey and yellow because you have the acid coming up. It’s horrible thing to do to your body.