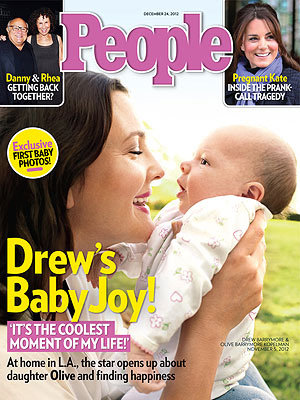 “It’s like the biggest crush I’ve ever had in my life,” Drew Barrymore gushes about her baby daughter Olive, born September 26 to her and husband Will Kopelman.

Being a mother is also giving Drew a second chance to have a happy family situation because her own childhood was troubled. Drew emancipated herself from her mother Jaid when she was 17 after going through rehab at age 13 for an addiction to alcohol and drugs that was directly related to her mother letting her party with her at an extremely young age. In 2009 she explained that they haven’t ever really reconciled, and despite tabloid reports that they’re speaking again for Olive’s sake, someone close to Drew says that’s completely fabricated. Drew also had a difficult relationship with her father, who basically wasn’t in her life because of his own addictions. Drew’s had two previous marriages, one two-month marriage (shorter than Kim Kardashian’s!) to bar owner Jeremy Thomas in 1994, and in 2001 she had a five-month marriage to comedian Tom Green.

Drew’s husband’s strong family background is helping Drew create a new one for herself. She says of Will, who is the son of Chanel CEO Arie Kopelman:

“Will comes from a strong family, he provides a strong family, it’s amazing. For people who didn’t have the strongest families or traditional families, if you can create that, you can have a second chance. It just makes me so emotional because it’s like a miracle.”

The actress tells people that motherhood was extremely scary at first, and she could barely eat or sleep for two weeks, but she finally settled into. She loves jumping up and down and singing “Good Morning” from Singin in the Rain to keep Olive happy.

She says she gained 40 pounds during her pregnancy, five of which in the last week: All bets are off! I’ll have two cheeseburgers.”

She’s working out to shed the weight, but trying to get super-skinny super-fast isn’t her priority: “impossible expectations are impossible. I’m the last person anyone should look at for workout tips. I don’t have them. I don’t care [laughs].”

Octomom Nadya Suleman hates her children, is disgusted and suicidal