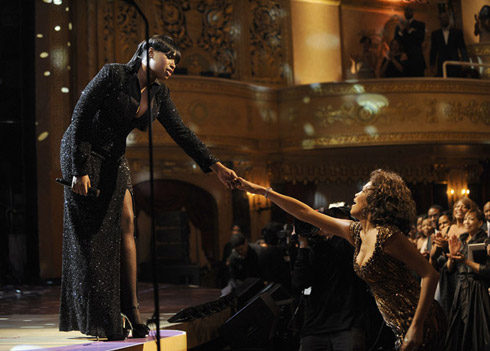 The Grammy production team has reportedly been trying to put together a tribute to the late Whitney Houston to be included in Sunday night’s telecast, and according to multiple sources, it will feature a “respectful musical tribute” by Jennifer Hudson and Chaka Khan.

“It’s too fresh in everyone’s memory to do more at this time,” Grammy executive producer Ken Erhlich tells the LA Times, “but we would be remiss if we didn’t recognize Whitney’s remarkable contribution to music fans in general, and in particular her close ties with the Grammy telecast and her Grammy wins and nominations over the years.”

Entertainment Tonight broke the news that Chaka Khan will also be part of the tribute.

This won’t be the first time Jennifer Hudson has been asked to pay tribute to the great Whitney Houston. She also performed a rousing rendition of the Dolly Parton penned “I Will Always Love You” as part of a tribute to Whitney Houston at the 2010 BET Awards. Whitney was in the audience and the two touched hands for the very memorable and iconic photo at the top of this post.

Here is the performance of “I Will Always Love You” by Jennifer Hudson: