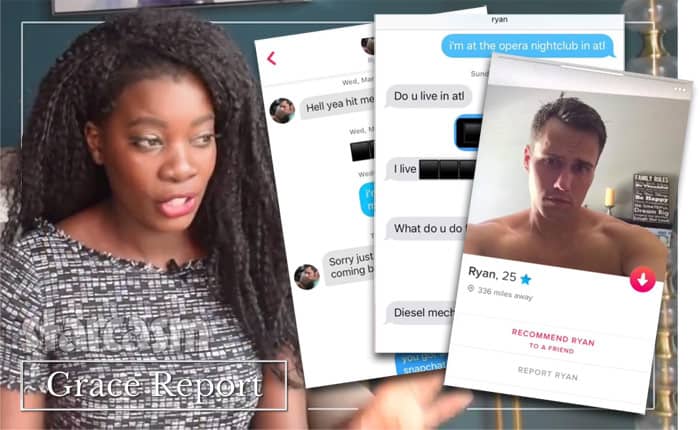 Teen Mom OG dad Ryan Edwards’ issues with drug addiction are back in the headlines today after the 30-year-old reality star was arrested on Tuesday with issues stemming from a heroin possession arrest. But, Ryan’s drug issues aren’t the only thing from his past resurfacing in the news today as there is a new report (with receipts) claiming that he is active again on the dating app Tinder.

The new allegations come from The Grace Report on Youtube, the same source that was the first to report on Ryan’s previous Tinder escapades that were later revealed to include scrotographs and specifics on a potential hook up Ryandezvous at the “Food City off 58.” Grace says she got the heads up on Ryan’s new Tindering courtesy of a tip from a woman who claims she was matched with him prior to striking up a conversation.

“Almost a week ago — this is the 22nd — someone reached out to me via DM and told that they matched with Ryan on Tinder,” Grace reveals about her Tinder tip, before revealing that she spent the entire week digging into the receipts and trying to confirm that it was in fact Ryan with the Tinder profile in question.

That confirmation came when Grace decided to call the number provided by the account. “I dialed the number from a dummy online phone thing that I was not expecting him to pick up for,” Grace recalls. Needless to say, Grace was quite surprised when someone answered.

“And so he picks up, and he goes, ‘Helllooo?’ And I’m, like, ‘Hi! Is Ryan there?’ And he goes, ‘Yeah, this is him,’ in the most distinctly Ryan voice accent. Like, it’s a hundred percent him you guys! I do not doubt it one bit you guys. That’s why I’m making this video after a week of waiting for more tea to come out.”

Later in the video, Grace summarizes her claim very succinctly: “I can one hundred percent verifiably say that this is true: Mackenzie Edwards’ husband…Ryan Edwards is, in fact, on Tinder looking to hook up with other women.” 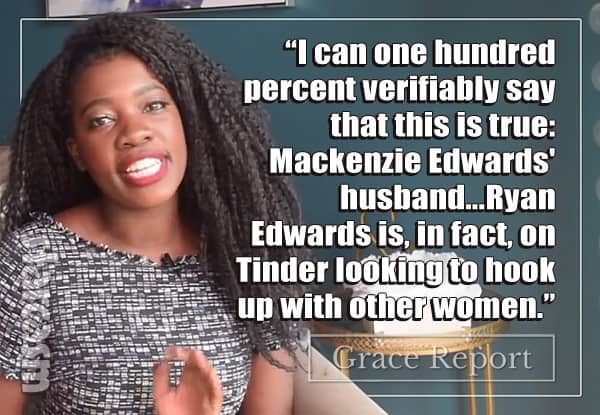 The video is not just about Ryan however, as Grace goes in on Mackenzie at length:

You saw, he just got arrested yesterday as well. Mackenzie, “when you marry for money you earn every last penny,” is what they always say. And I know she’s probably low-key happy about this because we all know she’s more about — in my opinion, just to cover some a** around here — she is more of a black widow sort of wife, like, gold digger, like, she, you know, secures a little bed with her marriage. She’s not going to get much spousal support out of that, you know, considering, you know, it’s not going to last all that long. BUT, she’s got her eighteen-year plan in the form on a child with Ryan. So she’s good, you know? She’s happy. All of this is only going to help her get primary custody of their child eventually, and gouge him for child support!

Grace gets even more harsh later in the clip as she details all of the reasons why she thinks Mackenzie is using Ryan — often citing their complete lack of chemistry in addition to a laundry list of other things. “The fact that she married him while high,” Grace says of the couple’s “sidewalk wedding,” before concluding: “I think she is a predator in the purest form of it.”

Grace says she advised her source to take her story to Radar Online, so it could be that we will be finding out more from them soon. (Grace references the last time she reported on Ryan’s Tinder habit and how no one took her seriously until Radar picked up the story weeks later.)