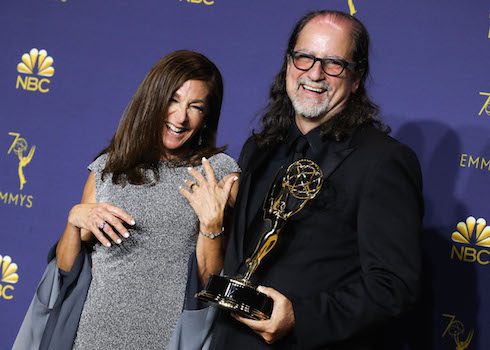 THE BLAST – First, director Glenn Weiss won an Emmy for helming this year’s Academy Awards broadcast. Then, he revealed he lost his mother two weeks ago and will be forever heartbroken. *Then* he pulled out his mother’s wedding ring and proposed to his longtime girlfriend Jan Svendsen onstage — and she said yes!

JEZEBEL – Glenn later revealed he was planning to propose to Jan last night at one of the afterparties if he didn’t win an Emmy…but then he did, gracing us all with a beautiful, delightfully unscripted moment

DLISTED – Some other things happened at the Emmy Awards, like The Marvelous Mrs. Maisel winning what felt like every single category in which it was nominated, including Outstanding Comedy Series. I guess I need to revive my Amazon Prime subscription now

CELEBITCHY – Colin Jost and Michael Che, who hosted the show, are getting…mixed reviews, at best. This (accurate) review is not at all mixed

LAINEY GOSSIP – Here’s Chrissy Teigen and John Legend looking their usual amazing at last night’s show. (I think the sequined gown Chrissy wore on the red carpet was actually nicer than the one she wore for the show and afterparty; John Legend would be dapper as hell in a fumigator’s uniform)

REALITY TEA – Among the many celebrities spotted out and about at the many Emmy afterparties: The entire Vanderpump Rules cast, who hit up Comedy Central’s gala together. Ariana Madix and Tom Sandoval look especially fetching

THE BLEMISH – In non-Emmy, crashing-back-to-earth-now news, apparently Fortnite is responsible for a surprising and rising number of divorces (as is “video game addiction” in general)

VOX – Somebody in Australia is going around sticking needles inside of individual strawberries at assorted supermarkets. This particular instance of “commercial terrorism” has so far happened in six of Australia’s eight states and territories, and police are baffled

THE ASHLEY’S REALITY ROUNDUP – I have honestly lost track of the number of Duggars and Duggar-affiliated people who are of marrying age, but John-David Duggar and Abbie Burnett are apparently getting married this November and I assume they are real people

Intervention Season 14 switches from LMN to A&E, will premiere March 22