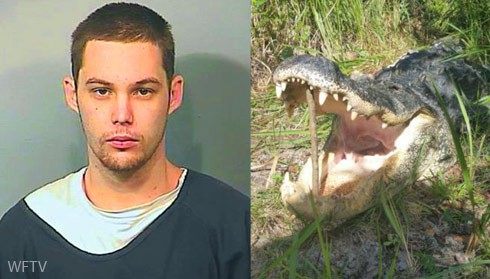 A 22-year-old Florida man was eaten by an 11-foot alligator while trying to hide from the police, according to authorities from Brevard County.

The body of Matthew Riggins was identified Monday after it was found in a lake on November 23. Investigators believe Riggins drowned as a result of an alligator attack.

WFTV reports that Riggins told his girlfriend that he and a friend were going to burglarize some homes in the neighborhood adjacent to the lake.

Police were called by a witness who said he saw two suspicious young men dressed all in black. When deputies arrived, Riggins and his accomplice fled. While on the run, Riggins called his girlfriend. The pair disappeared into a wooded area where the police were unable to chase them down.

When Riggins failed to return home the next day he was reported missing.

While his body was being recovered from the lake, dive teams came upon an alligator nearby. Florida Fish and Wildlife were called in and they euthanized it.

Reports said that the, “forensic examination of the alligator located remains consistent with the injuries to Riggins inside the alligator’s stomach.”

“So at that point, we had a belief that he was probably attacked by the alligator when he was trying to get away from police,” said Maj. Tod Goodyear.

Riggins’ alleged accomplice has been found and is currently refusing to cooperate with the investigation.