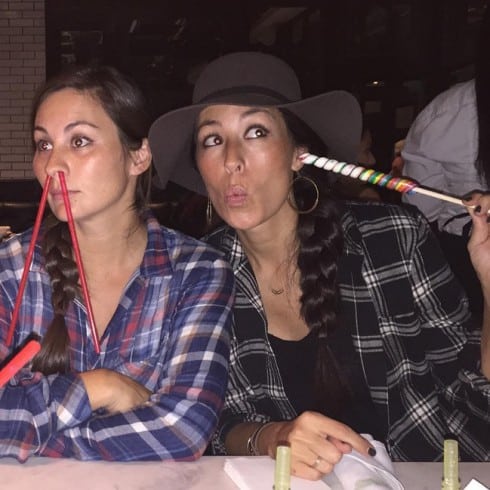 The latest Fixer Upper update in the run-up to Season 5 is another big one. It turns out that Chip and Joanna’s long-standing plan to Gaines-ify the entirety of Waco is about to get a bunch more helping hands, as Joanna Gaines’ sister has moved to town with her family and will feature in a new episode. We first saw Joanna and Mary Kay working together on a design for the show several months ago; at the time, though, it looked like the pair were simply collaborating, and not that Joanna Gaines’ sister was necessarily participating in her own Fixer Upper reveal.

Thanks to Joanna’s latest Instagram update, though, we know for sure that the two sisters will be reunited in Waco after nearly a decade apart:

Today's house was my all time favorite #fixerupper …we got to reveal this house to my sweet sis and her family of seven (going on 8!). I can't contain the excitement-after nine years they are finally coming back to Waco! Can't wait for you to see this episode ? #vintagemodern #plantladiesforever

So who is Joanna Gaines’ sister? Early devotés of the Fixer Upper star’s Instagram feed will recall that Mary Kay is affectionately known as Mikey, and that her seven children visit their Aunt Jo and Uncle Chip on the regular. According to Mikey’s own Instagram profile–the feed itself is set to private–she works for safe cosmetics company BeautyCounter.com, and is moving to Waco from Tulsa OK.

Fixer Upper fans may further recall that Mary Kay’s helping hand has appeared on the show before, even if Mary herself hasn’t shown up on camera. She’s pulled all-nighters with Joanna since at least Season 3:

Here’s a sweet snapshot of Joanna and Mary Kay after the birth of Mary’s fifth child back in 2015:

I was laughing this morning when I started getting texts and messages congratulating me on my new baby! No, I didn't have a baby and no, I'm not pregnant ?but my sister shines and I'm so proud of her! #numberfive #notme #her

And here’s another, this one of Mary Kay and her husband on a double date with Chip and Joanna just last year:

Finally, since this particular episode of Fixer Upper is all about sister love, we’ll close with a delightful throwback shot of all three Stevens sisters. (Since there’s a childhood photo in the original upload, does that mean this is technically a #doublethrowback?)

Mary’s Fixer Upper reveal came after the halfway point for the Season 5 filming schedule, but that doesn’t necessarily mean the episodes will be shown in their filming order. Nonetheless, Fixer Upper Season 5 is expected to premiere on November 28, 2017, so it’s likely that Joanna Gaines’ sister will make her big debut sometime in early 2018.

The Bill Murray Christmas Special is coming to Netflix, and it sounds as goofy as you’d expect