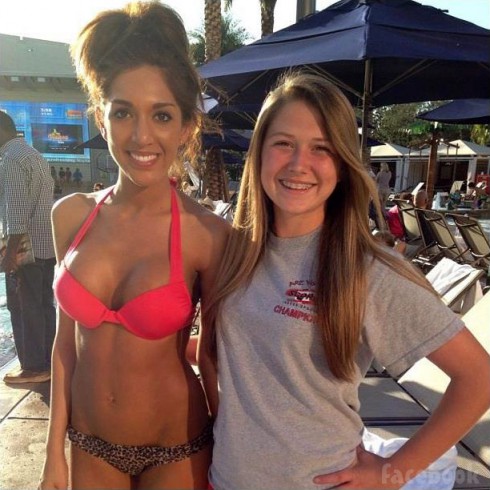 Former Teen Mom star Farrah Abraham is bringing in 2013 with her daughter Sophia in Orlando, Florida. Mom and daughter spent New Year’s Eve at Disney World, where they enjoyed the amazing fireworks show. Yesterday the two young ladies enjoyed taking a dip in the swimming pool at their hotel, and Farrah was kind enough to pose for bikini photos with fans. 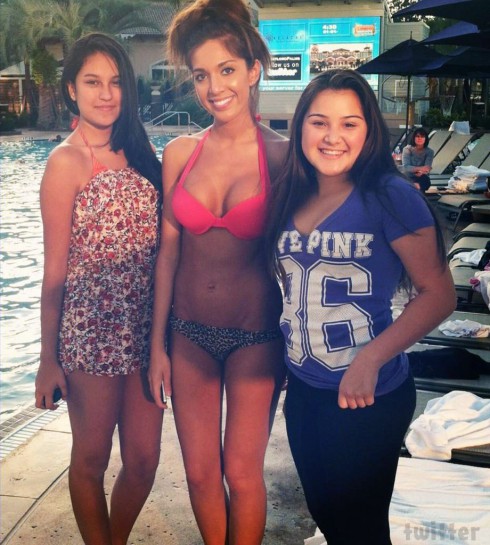 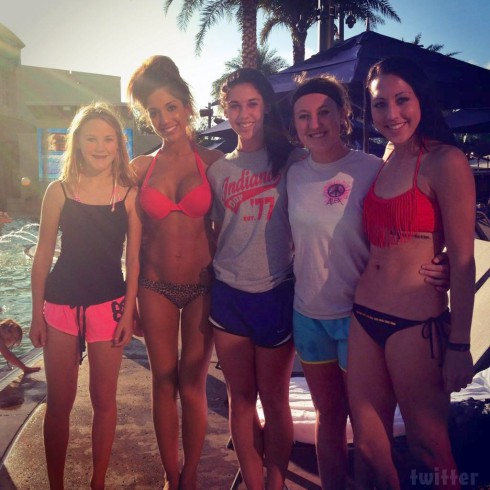 And here’s a bit of a grainy shot of Farrah and duaghter Sophia together in which Sophia appears to be a bit of a grumpy cat! 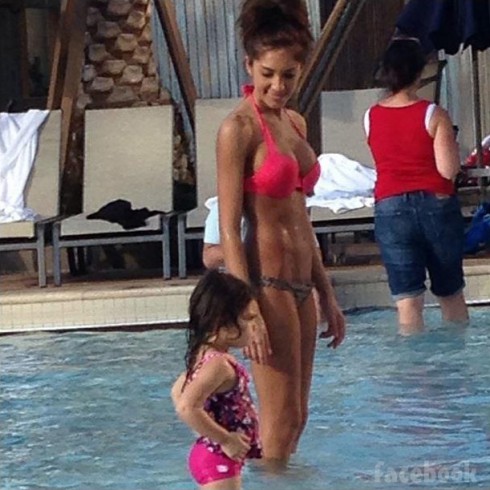 No doubt Farrah is proud of her new face and body after going under the knife several times over the past couple years. But what about recent reports that she is obsessed with Kim Kardashian and wants to look like her? (That there my friends is a pretty poor attempt at a segue!)

I think I know what my favorite guilty pleasure is going to be in 2013 — reading Farrah Abraham’s posts on Sulia! (Of course, that will all change if Bravo announces they are bringing back Gallery Girls for a second season.) Farrah is a honey badger when it comes to writing. Farrah don’t care about spelling, grammar, or any other out-dated literary conventions when it comes to communicating directly with her fans. The result is arguably artistic genius, much like some critics have said about her musical endeavors (example 2), in which she similarly discards unnecessary and outdated things like melody and singing.

Her latest entry on the site (which pays its writers per page view – so click on over and help a single mom out!) addresses a recent story in OK! magazine in which a “source close to the star” says “Farrah thinks that Kim is gorgeous and she feels like she and Kim look a lot alike, especially now that Farrah’s had her nose and chin done. But as far as Farrah is concerned, Kim is still prettier.” So what does Farrah plan to do to bridge the gap? According to the source, “Farrah’s decided she needs to get cheek implants because she doesn’t have enough definition on her face. And she wants to be a D cup just like Kim.”

In case you missed it (either in our posts about it or by just looking at the Farrah Abraham bikini photos above), Farrah has already gone under the knife for a number of procedures, including a $5,000 breast augmentation, taking her from an A cup to a C cup, as well as a nose job and chin implant, which reportedly cost her $16,000. According to the source, all of the plastic surgery is to help Farrah attain her dream of becoming a model. “She is desperate to have a proper modeling career and she says she’ll do whatever it takes,” says the source.

Soooooo… What does Farrah have to say about all of this? Here we gooooooooo….

Either way I’ve stated why I’ve personally have chosen to have enhancements ,

1. I’ve matured and am out of puberty, and have really thought about what two things have consistantly bothered me after years, I did not act upon any enhancments due to, peer pressure, being irresponsible with money, or secretly trying to immatate some one else.

2. Surgery is a big deal and choice, I found the right doctors who would not let me alter anything that is not naturally looking porporionate to my body type! I will never get an overly large (RACK, BUTT, LIPS, BOTOX, etc.)

3. I’m the only person in my family who has ever gotten cosmetic surgery, I do not feel everyone should have enhancements done. I wish everyone would love themselves naturl and as beautiful as they are, and if a Nose, or boob job is on your mind, YOUR NOT ALONE, those are the most popular areas that change negativly with age! hints ** saggyness, bumps, loss of etc**

` Further more if I wanted to look like anyone other then me that would be JASMINE, Princess Jasmine to be exact because I here I look like the real life version of her.

So cheers, to being ourselves and not wanting to change who we are, our lives, our choices,lives with anyone else or are genes!!

As far as Farrah Abraham looking like Princess Jasmine, I feel partly responsible for that after doing a series of posts with Halloween costume suggestions for the teen moms back in October of 2011. Here was my suggestion for Farrah and Sophia: 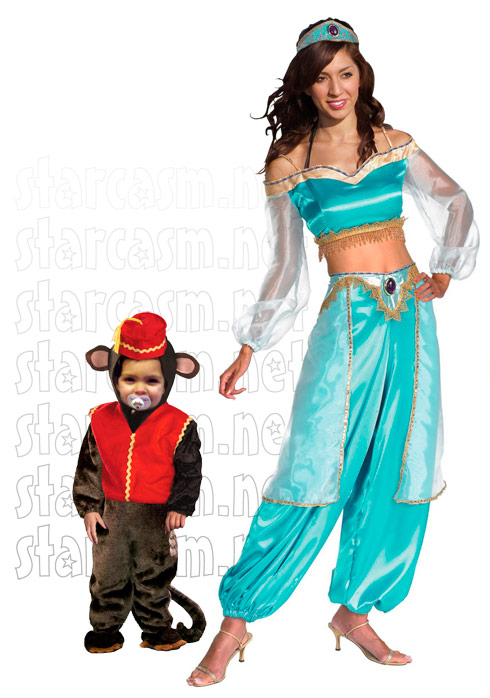 From now on I will be much more mindful of my Photoshop creations! ***Evil villain laugh***