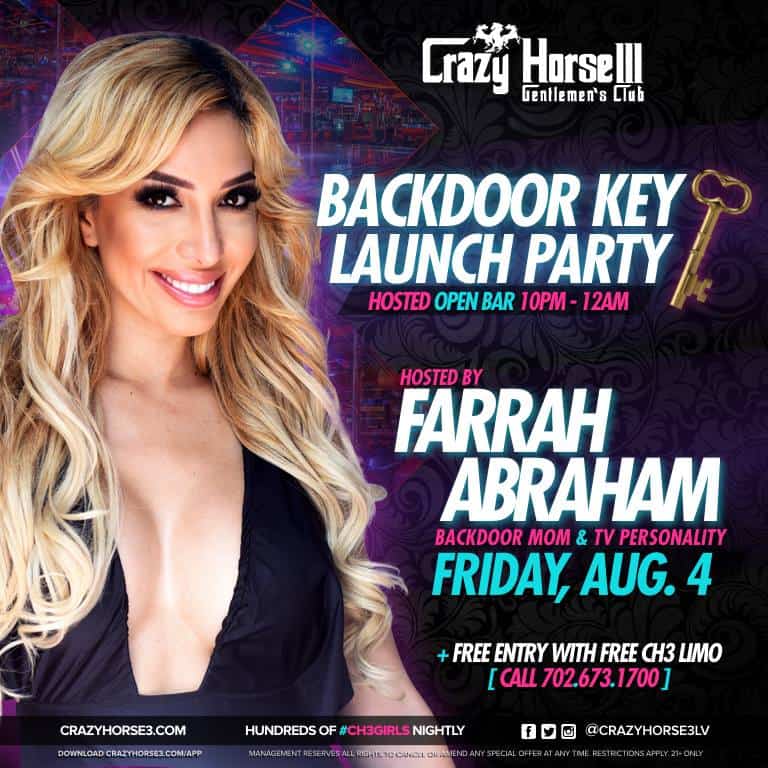 Farrah Abraham’s global quest for love via the dating reality series Single AF is over, and she has recently returned to the country that made her world famous. And speaking of what made her world famous, the always hustlin’ Farrah will be getting right back to work as she is serving as host of the “Backdoor Key” party at the Crazy Horse III gentlemen’s club in Las Vegas!

Farrah promoted her August 4 appearance with a promotional clip on Instagram earlier today. “#lasvegas your the best!” she captioned the short video. She continues: “Own the club & get your #BackDoorKey VIP Key package at the Kick-off event with me! ??? Aug 4th ??? Get free bottle & table! This is the way to PARTY ?”

I tried to figure out exactly what the “Backdoor Key Launch Party” is, but it’s not really clear. Here’s the description of the event from the Crazy Horse III website:

It’s the Crazy Horse III Backdoor Launch Party on Friday, August 4. Hosted by Farrah Abraham – Backdoor Mom and TV Personality. Open bar from 10pm to 12am. Call 702-903-1475 for free entry with free CH3 limo. Or book online now and save!

I like how the Crazy Horse III showed the more mature Farrah a little respect by dropping “Teen” and just referring to her as “Backdoor Mom.” 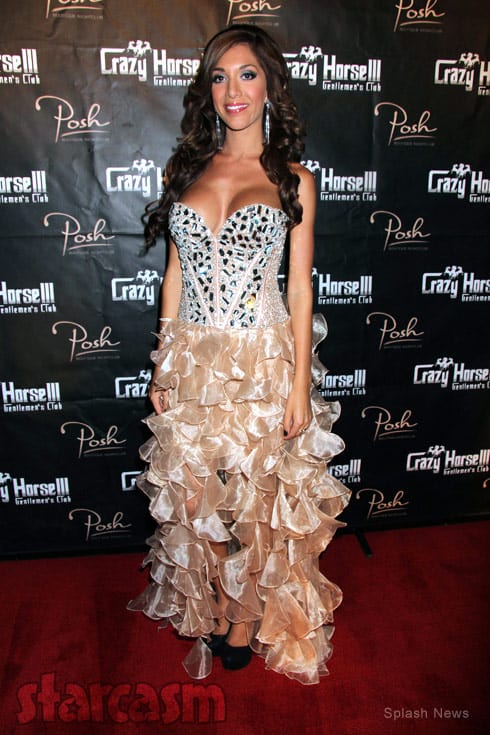 Farrah actually has a great history with the Crazy Horse strip club franchise. She helped kick off the Gentlemen’s Club EXPO at the Crazy Horse III in Las Vegas in 2013 (photo above), and in 2015 Farrah hosted the Grand Opening of the Crazy Horse gentlemen’s club in Pompano Beach, Florida with Simon Saran.

Speaking of Simon Saran, it appears that there is little hope of Farrah and Simon reconciling after their explosive and very public break up earlier this month. On Saturday, Farrah tweeted a screen cap of a text message she received from Simon which simply reads “Lets talk.”

Finally we have proof that Simon is fake and the haters were wrong — yet again! Wait, do we? Let me read through Simon’s message again…

The break up means that if you’re a feller looking for that rare special lady with well-documented bedroom skills and her own engagement ring, then you better bring your A game (and maybe some Ben Franklins) to the party!

Also, if you recall, Farrah is no stranger to the art of gyrating apparel removal, so perhaps she will treat those in attendance with an impromptu show? As awesome as that would be, I’m going to REALLY set you up for disappointment by pointing out that this is the Crazy Horse III, which sure seems like the perfect venue for a surprise appearance by Starburst the miniature horse! (In all seriousness, if I went and Starburst showed up I might feint.)

Let me wrap up by saying “Welcome back to the US Farrah!” It just didn’t feel like the same country without you. 🙂 #Farrahmerica #FarrahAbrahamerica