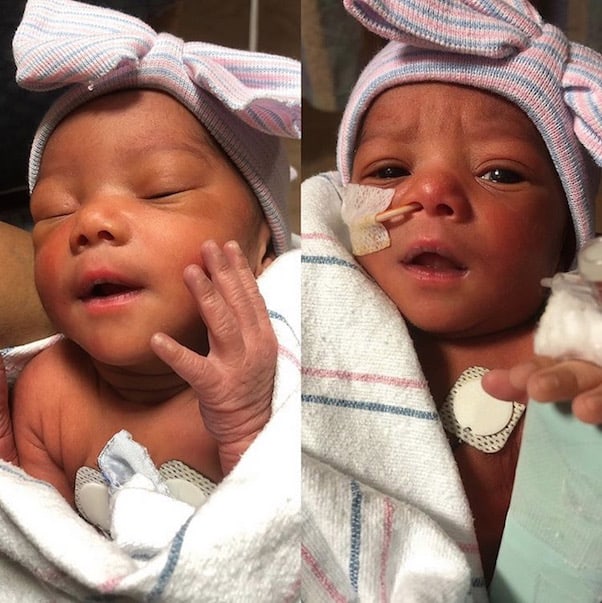 The Erica Dixon twins are here! Love & Hip Hop Atlanta star Erica Dixon, who confirmed her pregnancy months ago but has kept her baby daddy’s identity a secret since then, revealed her baby girls Embrii and Eryss last night. And according to Erica herself, this is maybe the last time we’ll get any photos of her twins for some time.

Erica shared the above photo of her twins on Instagram just a few hours ago. Based on the wording of the caption, though, it seems clear that her babies weren’t actually born yesterday — or even this weekend. Here’s how she broke the news of the Erica Dixon twins and their birth to the world:

This will probably be the only pic of them I post but here are my tiny tots fresh out the womb. I’ve been so busy with them and juggling everyday life that I realized I haven’t taken any new pics of them. Mamas babies #Embrii?Eryss

“I’ve been so busy with them” definitely suggests that Erica has been home from the hospital for at least a few days. And the fact that she’s been “juggling everyday life” long enough to realize she forgot to share any pics of her twins only supports the suggestion.

Also, in case it wasn’t clear from this article or its headline, we are 100% in favor of Erica keeping her baby daddy’s identity a secret for as long as she wants to. But the secrecy is noteworthy simply because Love & Hip Hop shows are not known for keeping the tightest lids on their tea. From the minute Erica was confirmed as a cast member for LHHATL Season 8, it’s just been assumed that at some point, someone will spill her tea and the daddy’s ID will slip.

But it’s been almost four months since then, and there’s only gossip to show for it. Erica has shot down a couple of popular theories: as VH1 pointed out, she called reports that Power star Rotimi was her baby daddy “False info.” Likewise the gossip that she’d gotten with Larenz Tate, which Erica said was “completely false.”

Congratulations to Erica and her twins and the twins’ father. May be you as successful keeping the babies off of Instagram as you are keeping their father’s identity to yourself.

What does Waka Flocka Flame mean? The curious origin of the rapper’s stage name