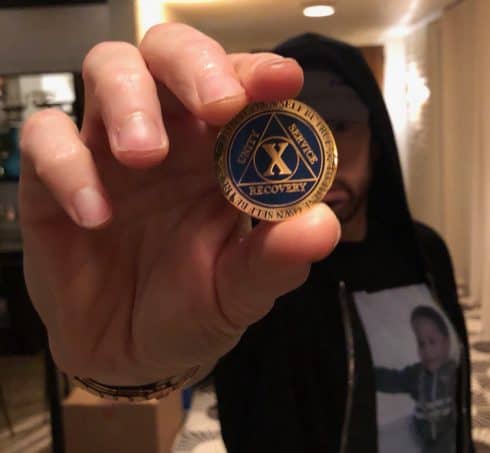 Before Eminem got sober in 2008, he was deeply addicted to both alcohol and prescriptions. He wound up in a hospital with a life-threatening overdose of methadone, a drug that many former opioid addicts take as a maintenance method to stay help them stay clean. Although that type of program can help many people live normal lives, Eminem had trouble not abusing.

In 2011 he opened up to the New York Times about that period of his life. “Vicodin, Valium and Ambien, and toward the end, which caused my overdose, methadone,” Eminem said, explaining what he was addicted to at the time. “I didn’t know it was methadone. I used to get pills wherever I could. I was just taking anything that anybody was giving to me. The first time I went to rehab was in Brighton, Mich. The second time I didn’t go to rehab. I just went to a regular hospital. I detoxed in the hospital, and then I came home. I couldn’t go back to rehab.”

He explained that he felt he couldn’t go back to rehab because his level of celebrity distracted people. “I felt like I was Bugs Bunny in rehab,” he said. “When Bugs Bunny walks into rehab, people are going to turn and look. People at rehab were stealing my hats and pens and notebooks and asking for autographs. I couldn’t concentrate on my problem. My kids helped me stay sober, and I also see a rehab counselor once a week.”

Eminiem also turned to running and cardio fitness to help curb his addictions — but was soon got addicted to exercise.

“I got an addict’s brain, and when it came to running, I think I got a little carried away,” he told Men’s Journal in 2015. “I became a fucking hamster. Seventeen miles a day on a treadmill. I would get up in the morning, and before I went to the studio, I would run eight and a half miles in about an hour. Then I’d come home and run another eight and a half.

“I started getting OCD about the calories, making sure I burned 2,000 every day. In the end I got down to about 149 pounds. I ran to the point where I started to get injured. All the constant pounding from the running began to tear up my hip flexors.

“Unless I was blitzed out of my mind, I had trouble sleeping,” he added, talking about life after rehab. “So I started running. It gave me a natural endorphin high, but it also helped me sleep, so it was perfect. It’s easy to understand how people replace addiction with exercise. One addiction for another but one that’s good for them.”

A major part of Eminem’s road to sobriety was help and friendship from Elton John, who still supports him. The pair had just worked together on the amazing 2006 Grammy performance of Eminem’s song “Stop,” but their bond goes even farther than music. John has been clean for about 28 years, almost two decades more than Eminem.

“[Elton] had a substance-abuse problem in the past,” Eminem told a Detroit newspaper when he first got clean. So when I first wanted to get sober, I called him, because he’s somebody in the business who can relate to the lifestyle and how hectic things can be. He understands, like, the pressure and any other reasons that you wanna come up with for doing drugs.”

Last year Elton John told Eminem in Interview magazine: “Your sobriety day is in my diary. I’m so proud of you. I’m 27 years clean, and when you get clean, you see things in a different way. It makes your life so much more manageable. It seems to have made all the difference—I can tell when I speak to you.”

Eminem’s sobriety story is certainly an inspiration for the millions who struggle with substance abuse.

How did Lady Gaga top Oprah on the Forbes Celebrity 100 List?

Nick Carter used to drink a liter of vodka a day