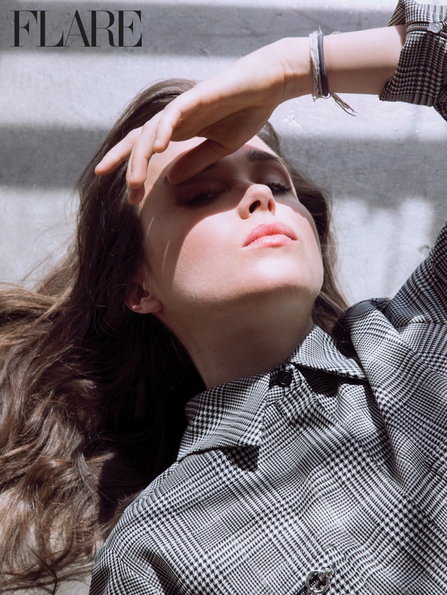 Ellen Page had a very special Valentine’s Day this year. While wearing an “All Love Is Equal,” shirt she gave a moving and inspiring coming out speech at Human Rights Campaign Foundation’s inaugural Time to Thrive conference. A decade or more ago this would be career suicide, but thankfully we live in a time when being gay isn’t a social death sentence. There are plenty who harbor hatred toward gay people, so it’s still a courageous move, but there are some who argue that coming out shouldn’t really be a thing anymore. People love who they love, and it shouldn’t matter. That was kind of the sentiment of Jodie Foster’s sort-of coming out speech at the Golden Globes.

Ellen covers the latest issue of Flare magazine, and she explained why coming out was so important to her. “You think you’re in a place where you’re all I’m thrilled to be gay, I have no issues about being gay anymore, I don’t feel shame about being gay, but you actually do,” she explained. “You’re just not fully aware of it. I think I still felt scared about people knowing. I felt awkward around gay people; I felt guilty for not being myself.” She was constantly having to check her pronouns when she spoke about her exes, and she just wanted to be open about who she really is.

The backlash she anticipated has been minimal, and instead she got a lot of love from the public. “I expected so much more hate,” she says. “It was just remarkably positive, which is beautiful, because it’s indicative of the change that’s happening.” However, she did get a note from a pastor on her flight. Two hours into their journey he gave her a handwritten note that said “While God thinks it’s lovely that you stood up for your beliefs, perhaps you’ve never had the loving arms of a father.’ signed “Your Heavenly Daddy.” Ellen decided to respond to his note via Twitter, “2 da Pastor who wrote me—Being gay isn’t a belief. My soul isn’t struggling & I don’t want arms of Heavenly Father around me. A girl’s arms? Yes.”

P.S. Ellen Page is currently single, “but would like her future girlfriend, if she’s reading, to know that she can’t wait to hang out with her.” Any takers?

Girl With the Dragon Tattoo role down to Ellen Page and Kristen Stewart?