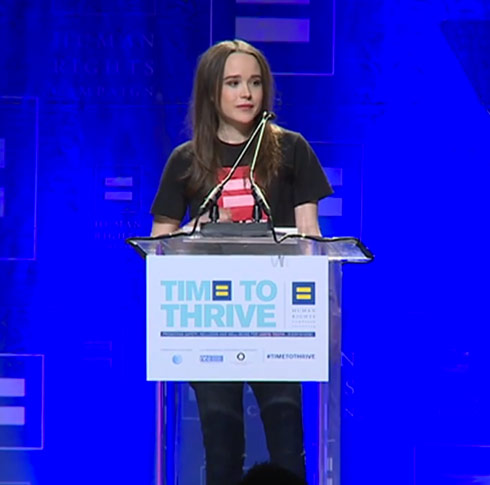 Academy Award nominated actress Ellen Page revealed she is gay during a speech yesterday as part of the Human Rights Campaign’s Time To Thrive conference, which focused on the welfare of LGBTQ youth. “I’m here today because I am gay,” the 26-year-old star of such films as Juno, Inception, and X-Men: The Last Stand told the audience at Bally’s Hotel and Casino in Las Vegas.

The audience responded with a huge round of applause and standing ovation before the clearly very emotional Page continued, “And because maybe I can make a difference. To help others have an easier and more hopeful time. Regardless, for me, I feel a personal obligation and a social responsibility.”

“I am tired of hiding and I am tired of lying by omission,” she added with her voice shaking. “I suffered for years because I was scared to be out. My spirit suffered, my mental health suffered and my relationships suffered. And I’m standing here today, with all of you, on the other side of all that pain. I am young, yes, but what I have learned is that love, the beauty of it, the joy of it and yes, even the pain of it, is the most incredible gift to give and to receive as a human being. And we deserve to experience love fully, equally, without shame and without compromise.”

Here’s the full video clip, which features about five minutes of Ellen setting up her coming out:

Here are some excerpts from the earlier part of Ellen’s speech:

“Here I am, an actress, representing — at least in some sense — an industry that places crushing standards on all of us,” Page said. “Standards of beauty. Of a good life. Of success. Standards that, I hate to admit, have affected me. You have ideas planted in your head, thoughts you never had before, that tell you how you have to act, how you have to dress and who you have to be. I have been trying to push back, to be authentic, to follow my heart, but it can be hard.”

She talked about having her appearance scrutinized in the media — on blogs and in the pages of tabloid magazines.

“There are pervasive stereotypes about masculinity and femininity that define how we are all supposed to act, dress and speak. They serve no one,” she said. “Anyone who defies these so-called ‘norms’ becomes worthy of comment and scrutiny. The LGBT community knows this all too well.”

“You’re here because you’ve adopted as a core motivation the simple fact that this world would be a whole lot better if we just made an effort to be less horrible to one another,” she said. “If we took just 5 minutes to recognize each other’s beauty, instead of attacking each other for our differences. That’s not hard. It’s really an easier and better way to live. And ultimately, it saves lives. Then again, it’s not easy at all. It can be the hardest thing, because loving other people starts with loving ourselves and accepting ourselves.”

Does Ellen Page have a girlfriend? Plus, find out why she decided to come out