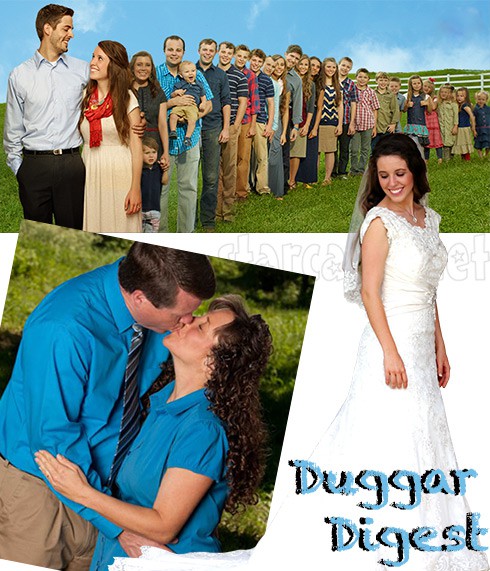 I really believed that in lieu of Duggar Digest today, I would be writing a birth announcement for Jill Dillard and Derick Dillard’s son. But, here we are we are at 41 weeks and 6 days without any big baby news.

Appropriately, this week’s episode of 19 Kids and Counting shows Jill and Derick going to their first birthing class. Other exciting events include Bubba the dog getting a bath, Joy delegating family chores and Anna sewing a present for Jessa and Ben Seewald. Here is what else is going on in the Duggar-verse…

Did Jill Dillard have her baby and hasn’t announced yet?

Out to lunch…maybe this spicy Mexican food will make the baby come! Only Braxton Hicks contractions with this weather so far. We shall see what the weekend brings! #nobabyyet #lunchwithmyhubby

Hear me out: Ever since Friday when Jill said “no baby yet” on Instagram, she’s gone completely silent on social media. There wasn’t even a post on Easter Sunday, which is out of character.

Besides that small sign, there is the practical matter that health risks for mom and baby increase around 42 weeks. According to the National Institutes of Health, the placenta may not work as well by 42 weeks, which could lessen the amount of oxygen and nutrients that reach the baby. The amniotic fluid around the baby may decrease, which could also restrict the baby’s oxygen and nutrients.

If Jill and and Derick have indeed welcomed their son, expect an announcement on the cover of People tomorrow morning.

Ben Seewald is criticized for disrespecting other religions

Ben, 19, marked Easter with a controversial Instagram post that many followers interpreted as rude to people who practice other religions.

Making matters worse was the tone of his personal caption, which said, “Look at the facts y’all. You have to go on blind faith to believe that Jesus didn’t resurrect. All the evidence shows that Jesus rose from the dead. He was seen by over 500 eyewitnesses over a period of a month-plus.”

Although most who follow the Duggars (and Seewalds) are Christian, there is plenty of dissent in the comments section.

“Why must you put down other religions? I know that you have a strong faith for your religion, but shouldn’t everyone except [sic] one and other regardless of what they believe in, and if not that at least provide the understanding that others do believe just as strongly as you believe in your faith In their own (those who follow other religions),” one responded to the post. “I do not ask this because I am putting down your beliefs, I ask this because so many except your religious beliefs and you should do the same for others.”

Another added, “A lot of the people who have questioned Ben’s post are actually Christians of one form or another anyway (myself included). The main issue we are trying to put across is that he is in a position of power and influence because of his fame, especially to young minds, yet he is spreading an us v them stance on Christianity often with a condescending/disrespectful tone which can end up breeding hatred and it’s a shame he doesn’t use his platform to spread the love of Christ more rather than this vengeful stuff which he often posts.”

A new episode of 19 Kids and Counting airs on TLC tonight at 9/8c.