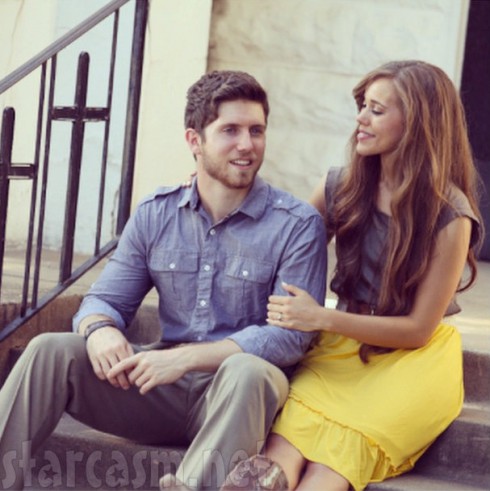 Today’s the big day! Jessa Duggar’s wedding to Ben Seewald is scheduled to occur later this afternoon in Bentonville, Ark. Before doing the real run in front of an estimated 800 guests, Jessa and Ben went through the motions at their rehearsal last night.

“I’m so happy to have so many friends here from so many places,” Jessa, 21, said at the rehearsal, according to People. “And I’m so grateful for my parents. Their influence has been so special to me. I look forward to a long, happy, marriage.”

Ben, 19, also thanked family and friends who came in for the event.

“When I look at all the faces surrounding us tonight,” he said. “I don’t know how to thank all of you for investing in our lives, and in our life together. Y’all make us feel so special.”

Based on pictures from People, it looks like Jessa will follow sister Jill Dillard’s lead with some wedding practices — such as going barefoot and running down the aisle with her new husband. Jessa previously said her main goal was to keep the affair simple. (Or, at least as simple as it can be with such a big invite list.)

After the church rehearsal, Ben and Jessa watched video tributes from family and friends while dining on Frito pie, pumpkin pie and apple caramel streusel pie. In addition to the traditional Duggar reenactment of the proposal, the family played a special message from Christian comedian Tim Hawkins in which he unbuttoned the top button of his shirt and joked that’s how a Duggar boy rebels. There were also live toasts from many of the guests, including Jessa’s sisters Jinger and newlywed Jill…

“Jessa and I shared a lot with us being in relationships and us getting married, and now they are following along,” Jill said. “We have great examples in our parents that love doesn’t have to end. Spend lots of time together and remember, the honeymoon doesn’t have to end.”

Did Nicole Richie and Joel Madden secretly get married?