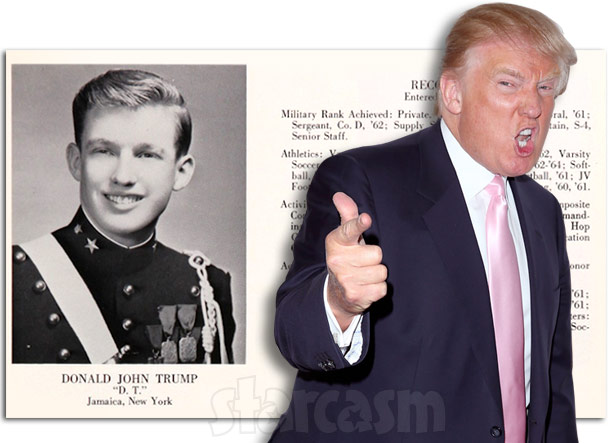 Just a few weeks removed from his first military controversy, Donald Trump finds himself in the center of another. This time, though, it’s not because of what Donald Trump did; rather, Trump is at the center of criticism for something he didn’t do. In a new interview, Trump said his time at a military academy means he was “in the military in the true sense,” and appeared to slight veterans.

According to the New York Times, Trump sat for six hours of interviews with former Newsday reporter Michael D’Antonio, whose book on Trump, Never Enough: Donald Trump and the Pursuit of Success, will be released on November 22. Part of those interviews dealt with Donald Trump’s military background–or, more specifically, the five years he spent at the New York Military Academy, from 1959 to 1964.

The Times report asserts that Trump’s parents sent him to the “expensive prep school” in order to “correct poor behavior.” And, according to Trump, he “always felt that [he] was in the military,” since his five years at school gave him “more training militarily than a lot of the guys that go into the military.”

Donald Trump was not drafted into the military because of a high draft number–356 out of a possible 366. He also had a series of medical deferrments for heel spurs–which Trump was eager to show D’Antonio, taking his shoes off during the interview to do so.

When D’Antonio asked Trump whether he felt that spending five years in a school some of whose instructors had served in the military was equivalent to spending time in the military himself, Trump doubled down. “My number was so incredible and it was a very high draft number,” he said. “Anyway so I never had to do that, but I felt that I was in the military in the true sense because I dealt with those people.”

Donald Trump also recalled a former music teacher at Kew-Forest, the school Trump attended before enrolling at the New York Military Academy, who Trump punched in the face, delivering a black eye. The reason: “I didn’t think he knew anything about music.”