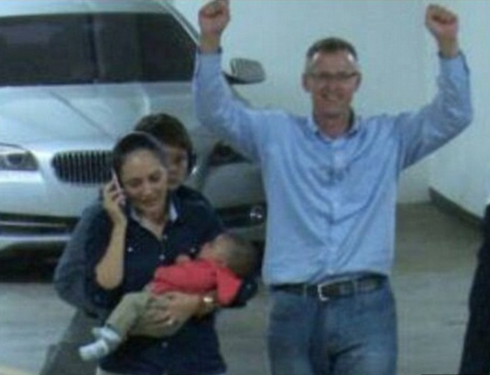 Mercedes “Mercy” Casanellas and Richard Cushworth were reunited with their biological child after three months of not knowing where he was. When DNA tests revealed that son Jacob, born in El Salvador, was not related to them, the couple worried that their biological baby had been swapped and sold to child traffickers. Now, they are citing the harrowing episode as a “mix-up” at the hospital.

Mercy Casanellas told the Daily Mail that she and Richard Cushworth named the baby Moses because of the similarities with his situation and the Bible story. “[We] have named him Moses because he was lost for three months and now he’s been found,” she said. “Moses was hidden away for three months before he was found by the Prince of Egypt. It’s very moving.”

“There are no words to express what our heart feels to have our baby at home,” the couple said in a statement about their reunion. “Thanks to all who joined our pain and fed our hope.
Thank God our family has gathered, for the moment we are not allowed to upload photos but soon we’ll give more details of the outcome of this miracle.”

The baby was found after Salvadoran investigators ordered new parents to have their children’s DNA tested. Said Richard Cushworth, “I can’t say for sure what really happened. We’ll have to see how it works out through the legal system before can be certain.”

“I feel for the other family,” Cushworth continued. “We know nothing about them, except that they only just found out today that their baby isn’t really theirs. It must have been devastating.”