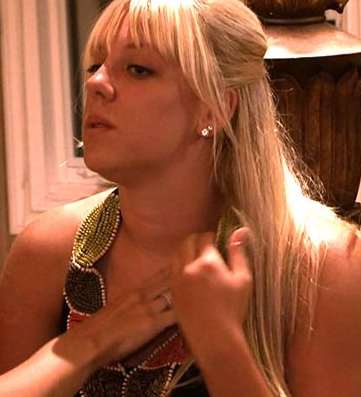 In Episode 12,  Season 5 “You Can Dish It But You Can’t Take It” Briana Wolfsmith sits her mother Vicki Gunvalson down to reveal some upsetting news, she has several tumors the size of grapes on her thyroid and through her neck and she’s going to have to a biopsy to see if they are cancerous. Vicki, never one to seem especially empathic reels back in shock and exclaims how she can’t take another “issue” after getting Briana through school and a job. She also expresses concern over having 150 agents coming the day of Briana’s biopsy, to which Briana looks away and meekly tells Vicki she doesn’t have to go. Vicki insists and soon we learn that Vicki herself struggled with a similar disorder for about 35 years.

On camera Briana always comes off as a very likable, grounded girl;  a bright beacon shining in a sea of ridiculous excesses and skewed priorities, so it’s especially sad to see her in such a scary situation (of course it would sad if any of these firecracker ladies were ill, we love you Housewives!). During this episode Vicki does accompany her daughter to the biopsy, and then later takes her to San Francisco for a Housewives trip, admitting on camera that she hopes Briana might deflect some of the women’s wrath. At some point a very tipsy Gretchen collapses into tears over the news of Briana’s biopsy.

Vicki has since blogged and interviewed with updates on Briana’s health, and the good news is so far no cancer has been found. The bad news is that the tumors have continued to grow (they’ve increased from 8 to 30 and are starting to be visible) as of a February appointment, and now they are awaiting the results of a second biopsy.

Although that sounds scary, the prognosis may be good as this is probably the same disease Vicki herself struggled with for much of her life, but she’s still healthy and going strong. Vicki’s disease is called cholesteatoma, and she told the L.A. Times blog Showtracker that when she was 23 some of the tumors had spread to her brain. She’s had lots of surgeries which unfortunately are probably in store for Briana, but it sounds like this is a condition she can overcome!

UPDATE: In 2011 Briana’s condition with the tumors in her neck worsened, and combined with the fact that Brian’s been feeling fatigued for a while, doctors did some exploratory surgery to remove her thyroid and all the lymph nodes in her neck. There’s been no public release of information about Briana’s condition, but as of March 15, the latest footage Bravo has released about Braina’s surgery shows a tearful Vicki Gunvalson tell the camera man that the surgeon said Briana’s thyroid was the worse he’d ever seen. It was covered in nodules, and was the wrong texture and color. The surgeon told Vicki it was probably cancer, but they didn’t know for sure. We’ll have to wait for March 20, 2012 episode, or possibly later to find out if the results came back as cancer. Right now it doesn’t look good, but hopefully even if it is cancer, they were able to catch it early enough to give Briana a good prognosis.

UPDATE! Briana does not have cancer!

Briana has since gotten married, and we’re rooting for her to live a happy and healthy long life!