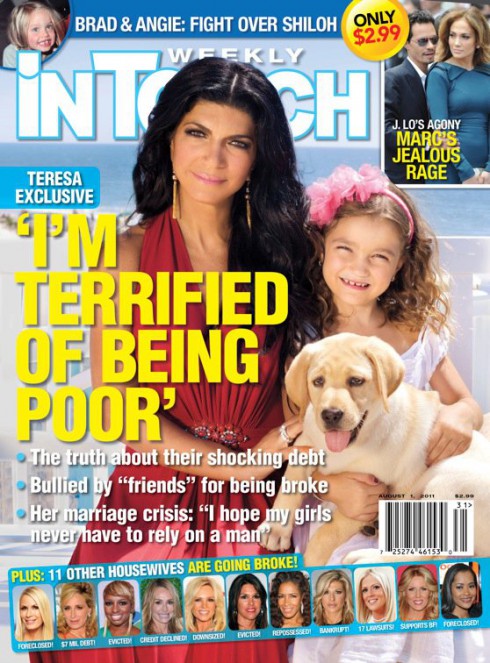 Real Housewives of New Jersey star Teresa Giudice has denied selling articles and photos to tabloids, especially In Touch, which directly quote her, but she has also admitted it. So, the short answer to the above question is yes.

For a while last summer Teresa was on the cover of In Touch almost every single week talking about either her and Joe’s legal and financial issues, or family and friend drama on the show. It happened so much, and became such an integral part of how Teresa interacted with the rest of The Real Housewives of New Jersey cast that Bravo actually incorporated the tabloid stories into the show (something that is usually never done, or at least not as extensively as this.)

Teresa wrote on her Bravo blog that she’s been burned before by US Weekly, who invited her, Dina Manzo, and Danielle Staub to a photoshoot, then used their photo and quotes along with this headline: “Real Housewives’ Dirty Secrets.” She got no pay, so she vowed the next time a magazine called, she would ask to be compensated.

“Why not get paid if you can?” Teresa wrote. “They’re making money selling your face, why shouldn’t you get something? I”ll pose for a picture if it means I can put money in my kids’ college fund. Deal.”

But, if it seems like easy money, think twice. There’s a catch.

“The second time I was asked to possibly be on the cover of a magazine was with Jacqueline and our new babies for In Touch. Someone (maybe another Housewife from another franchise, I forget because I didn’t even have a PR person back then… I knew nothing) told us that you should ask for money to be in the magazine. Great idea, we thought! Why not get paid if you can? They’re making money selling your face, why shouldn’t you get something? I’ll pose for a picture if it means I can put money in my kids’ college fund. Deal.

Here’s the deal though: you’re only ever paid for photographs. The magazine has to pay for photos no matter what: either they do a photo shoot with you, or they pay for shots from a professional photographer who just happened to catch you walking down the street, or god forbid, the paparazzi.”

Teresa reportedly got $6500 for photos accompanying her recent apology cover story for In Touch.