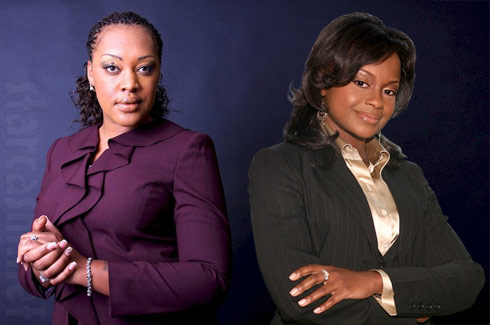 Things are slowly moving forward in the legal showdown between The Real Housewives of Atlanta‘s Phaedra Parks and Angela Stanton, author of the book Lies of a Real Housewife, which alleges Phaedra Parks was the mastermind in several illegal schemes that eventually led to Angela and Apollo Nida’s arrests.

On Monday, Angela’s attorney, James Radford, filed a motion for summary judgment against Phaedra, which essentially means that he is asking the judge to rule in Angela’s favor prior to the case going to trial. Normally a summary judgment motion is chock full of rebuttals for claims made by the opposing counsel, but Radford didn’t have that burden because there have been no claims from opposing counsel! In fact, the main thrust of Radford’s argument is that Phaedra and her counsel have repeatedly dodged numerous attempts to have Phaedra deposed, and thus she has offered absolutely no evidence to suggest that the claims made by Angela in her book were untrue and thus defamatory.

Attached to the summary judgment motion (included in its entirety below) are numerous communications between Radford and Phaedra’s attorney in which there were attempts made to set up a time for her to be deposed, with each and every one either being rescheduled or denied. In contrast, Angela Stanton was deposed on February 4 for over five hours. (You might remember that day because it was during Angela’s deposition that news “leaked” online that she had been arrested for a family dispute — something Angela revealed early in the deposition proceedings.)

In addition to the exhibits featuring all the failed attempts to depose Phaedra, there are also depositions from acquaintances of Angela Stanton in which we are seeing for the first time corroborating evidence backing up Angela’s claim that Phaedra was actually involved with (actually the one in charge of) the fraudulent check and auto theft schemes for which Angela was arrested.

Ex boyfriends (and baby daddies) of Angela’s go on record saying they witnessed Phaedra actively participating in the criminal activity with Angela, and other witnesses state that the two were clearly more than friends. One ex-boyfriend, Justin Cody, even goes so far as to say that he thought Angela and Phaedra may have been in a relationship, and that an argument over that possibility is partly why they broke up! Cody goes a step further by supplying a little TMI when he reveals that Phaedra was known as a “head doctor,” and by that I am not referring to a shrink! (I’ve included the explanation below.)

Here is a summary of the summary judgment motion followed by the full document with exhibits as an embedded PDF file. (I’ve included large chunks of the intro because it summarizes Radford’s argument. That is followed by bullet points.)

“As set forth below in Defendant’s supporting memorandum, the record contains no reasonable basis upon which Plaintiff may prevail on her claims, which sound in defamation. Specifically, all the evidence in the record points firmly to the conclusion that the statements contained in Defendant’s book, Lies of a Real Housewife, regarding Phaedra Parks, are true. Plaintiff has refused to have her deposition taken in this matter, and otherwise has not produced any evidence to support her claims.”

“…Throughout the discovery process, Plaintiff has failed to present a single piece of evidence to support her claims. In contrast, Stanton has produced numerous pieces of evidence to support her defense that the facts contained in the book are true. Moreover, Parks, by refusing to appear for her deposition, by refusing to produce documents, and by failing to place into the record any evidence to support her complaint, has failed to raise a genuine issue of material fact as to the issues in this case. Accordingly, judgment must be entered in favor of Stanton as to Plaintiff’s claim for defamation, and Parks’ Complaint must be immediately dismissed with prejudice. Defendant should be awarded a reasonable attorneys’ fee due to Plaintiff’s maintenance of a frivolous legal action against her.”

• Phaedra attended Angela’s mother’s funeral while Angela was in jail and was seen holding Angela’s baby.

• Angela’s ex-boyfriend, Justin Cody, says she and Phaedra were so close that he thought they were “romantically involved” and cites their “closer than close” relationship as a reason he and Angela broke up!

• Angela’s ex Justin Cody says he witnessed Phaedra accepting merchandise purchased with the fraudulent checks in the underground parking lot of the Varsity Restaurant in Atlanta.

• The fraudulent check scheme ended when a warrant was issued for Angela’s arrest in Clayton County some time in 2001.

• It was after the warrant was issued and the fraudulent check scheme was concluded that Phaedra first proposed the new scheme and introduced Angela to Apollo Nida.

• Angela was later arrested for the previous check fraud scheme and while she was serving her sentence Apollo Nida was also arrested.

• Once Angela got out she hooked up with Phaedra again, and was introduced to Apollo’s close friend, Everett Tripodis.

• Angela says Phaedra orchestrated a complicated luxury car theft scheme that crossed state lines. Angela’s boyfriend Leonard Holland says in a deposition that he was present at meetings between Phaedra, Angela and Everett on at least two occasions. “Holland personally witnessed Parks deliver instructions to Stanton and Tripodis on how to carry out the scheme, and provide Stanton and Tripodis with the fraudulent documents used to carry out the scheme.”

• Angela and Everett were arrested in 2004 in connection to the car theft scheme, thus ending Angela and Phaedra’s criminal interactions.

• Angela talked to Phaedra “daily for a period of several months” while incarcerated, thanks to the help of Angela’s sister-in-law, Regina Matthews, who would set up three way calls with Phaedra.

• The documents detail a seemingly endless string of requests on the part of Angela’s attorney to have Phaedra give her deposition, all to no avail. The result is that Phaedra was never deposed.

• In contrast, Angela was deposed for over five hours on February 4. (You might remember that day because it was during Angela’s deposition that news “leaked” online that she had been arrested for a family dispute — something Angela revealed early in the deposition proceedings.)

• During Leonard Holland’s deposition he reveals that Phaedra Parks was regarded as a “head doctor,” and by that I’m not talking about being a shrink. Here’s what Holland said when asked in Angela’s relationship with Phaedra was professional or more personal in nature:

It was always, hey, I have a friend who is a lawyer. And so I know I first met her it was just introducing me to the lady. And I don’t want to get too personal; but I know that it is funny, she is known as a head doctor. She is very good at giving head. So I think she imparted that knowledge on my girlfriend. And we just laughed about that, and that’s how she got me to be her boyfriend.

“Parks has displayed a clear disregard for the rules of this Court and the rules governing civil litigation in Georgia, and her contempt for these rules are made even more egregious due to the fact that she is a duly licensed Georgia attorney and an officer of the Court. Because she has refused to sit for her deposition, she has failed to produce even the most basic evidence to support her claims — that is, her own testimony. Therefore, judgment in favor of Stanton is required.”