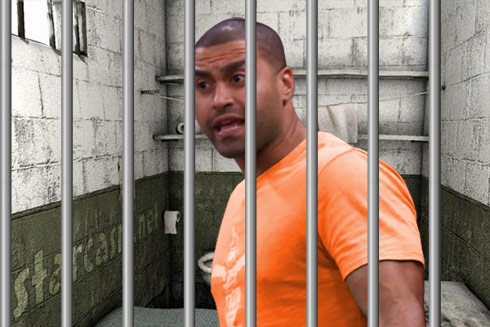 Real Housewives of Atlanta cast member Apollo Nida was supposed to turn himself in by noon yesterday to begin his 8-year prison sentence for numerous fraud charges. He missed that deadline and was said to have been in some kind of argument with wife Phaedra Parks over money and seeing his kids before going away.

We can confirm that Nida is now officially behind bars.

A rep for Nida contacted AJC to verify that he finally entered the minimum security federal prison in Lexington, Kentucky early this morning. This was backed up by Nida himself via Twitter:

Apollo also posted a video to Instagram thanking all his supporters:

“Well everyone, I have finally arrived at the penitentiary. I’m about to go asunder. Thank you for the support and prayer. Stay tuned and you’ll hear from me shortly.”

As for where Phaedra is at with all of this, Parks’ spokesman told CNN:

“Phaedra is now putting all of her energy into ensuring the well-being of her two children and making decisions that are in their best interests. This situation has put a tremendous strain on Phaedra and her family, and she is working hard to bring back a sense of normalcy to everyone’s lives.”

According to Nida’s attorney, the earliest he could be a free man would be in 2021 – if he meets good behavior requirements.