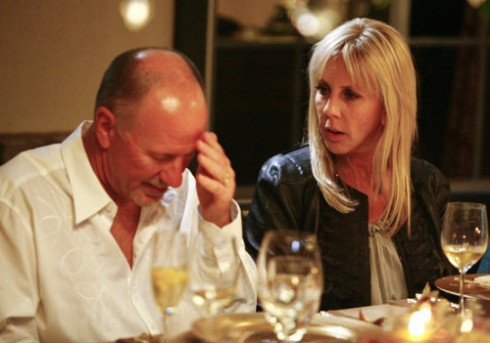 Vicki Gunvalson filed for divorce from her husband Donn in October of 2010 after 16 years of marriage and one vow renewal which aired on The Real Housewives of Orange County. While fans hadn’t heard much about Donn since (he’s been battling prostate cancer,) their marriage was recently revisited by Lauri Waring during her return to the show. According to Lauri, Vicki has never been with just one man — even during her marriage.

During a lunch meeting with Gretchen Rossi earlier this season, Lauri revealed that she once walked in on Vicki in bed with both a man and a woman. When Vicki confronts Lauri about it on tonight’s new episode, Lauri clarifies that she never said that she had sex. Still, Vicki claims that Lauri has told people that she had “multiple partners.”

“What about the Greek guy? What about the volleyball player that you told me that you guys did amazing things underneath the blanket coming back from Florida to L.A.?” Lauri asks, adding that the incidents occurred before she and Donn had divorced.

“Donn and I were separated many times,” Vicki explains. “We were both unfaithful.”

Vicki and Donn’s relationship seemed troubled at times on early seasons of The Real Housewives of Orange County but after their vow renewal during 2009, Vicki’s love tank seemed to be full. At the time, Vicki explained, “Donn and I renewed our vows after 15 years of marriage because we almost got divorced last year. When we decided to stay together, we felt we needed to restart on a clean slate.”

They split for good one year later, and Vicki has had an on-again, off-again relationship with Brooks Ayers.

Russell Brand jokes about sex life with ex-wife Katy Perry, says he thought of “anyone else”