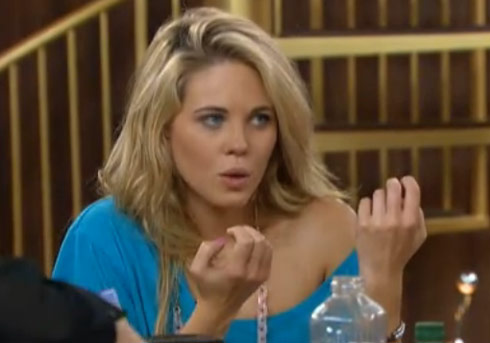 CBS aired a segment last night featuring some of the racist and homophobic things said by houseguest Aaryn Gries. A controversy erupted when dedicated viewers of the Big Brother 24/7 live feed pointed out bigoted comments being made by several of the houseguests.

As part of the segment, fellow competitor Howard Overby stated in the diary room, “Even when these comments are made in fun, they still hurt and are disrespectful, especially when that person isn’t there to hear it and back themselves up.” Also viewers were shown a conversation in the HOH room in which several houseguests discuss what Overby, a youth counselor, called “derogatory comments.”

An incredulous Judd voiced what legions of viewers have been thinking when he asked, “Does she [Aaryn] not know we’re on TV and you shouldn’t say stuff like that?”

Among the things said by current Head of Household Aaryn that was revealed on the broadcast:

• In reference to Kim – an Asian-American “Go make some rice.” She later says about herself in the morning, “I look, probably, like a squinty Asian right now.”

• In reference to Andy, who’s openly gay “No one’s going to vote for who that queer puts up.”

• In reference to Candice – an African-American “Be careful what you say in the dark, you might not be able to see the b!tch.”

The clip concluded with another houseguest, Amanda, pointing out that all of Aaryn’s bigotry was not only going to hurt her inside the house but outside as well.

“She’s very naive and sheltered and she makes comments that are completely inappropriate where she makes fun of other people for what they look like and their ethnicity and I think it’s going to hurt her a lot, in the game and outside the game.”

It turns out that Amanda was right on the money. Aaryn was dropped by her talent agency while fellow houseguest GinaMarie Zimmerman was fired from her full-time job as a pageant coordinator because of racist remarks she’s made.