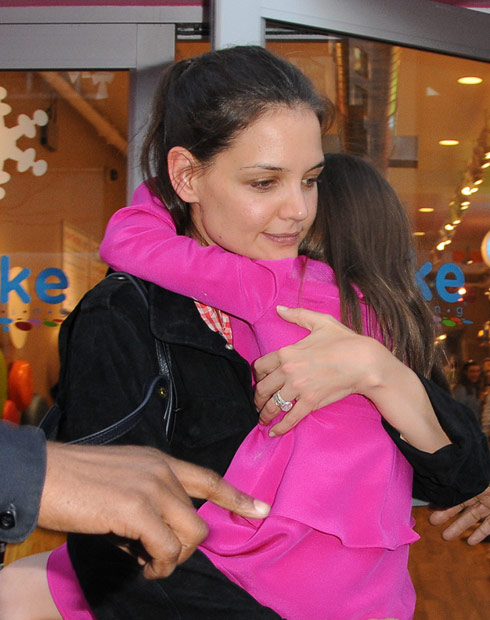 It’s almost mission impossible to keep up with the rumors and reports circulating around the divorce of superstars Tom Cruise and Katie Holmes. Just so you can represent at the water cooler or on your Twitter feed here’s a round-up of the latest on the biggest D of the year (so far).

• Katie Holmes appears to have had a strategic legal reason to file for divorce in New York as opposed to Los Angeles. Her priority is the sole custody of daughter Suri and the courts in the Empire State are much more likely to side on the judgment of having a one-parent custody.

According to People, Katie sought guidance from her attorney father, Martin, who came to New York from his home base in Ohio to assist with Katie’s quick decision to make the move while Tom is overseas filming.

• The big breaking straw according to sources with TMZ for Katie was the fear that Suri would be sent off to Scientology’s Sea Organization. Sea Org is a hardcore Scientology training ground and it was Katie’s fear and reluctance to have Suri sent off that finally forced her to make the decision to file.

According to the official Scientology website, members of Sea Org sign, “A one-billion-year pledge to symbolize their eternal commitment to the religion and it is still signed by all members today.”

• There were reports that Holmes was being followed by members of Scientology as a couple of SUVs had been photographed following the actress around the last couple of weeks as it became apparent things were falling apart. A lawyer for the church denied these accusations.

• Tom and Katie had been living separately recently signalling possible troubles. Katie has been moving herself and Suri into a new 3 bedroom apartment in New York City.

• Katie’s family has been allegedly gathering intel on Scientology and how the church has an “iron grip” control over Tom and Katie’s life according to Radar. Their source is high-profile ex-member Tom Rathburn.

• Tom has “lawyered up” with Dennis Wasser, the same attorney Cruise used during his split with actress Nicole Kidman.

I’m sure there’s more and hundreds of reports have probably hit the web while I was writing this up but these are the highlights on the latest in regards to Tom Cruise and Katie Holmes’ split. It’s apparent that the central focus of all of this is Tom’s role in Scientology. We’ve posted up an introductory piece on this relationship and will be delving deeper into the interesting practices and belief system that Cruise is so impassioned by.