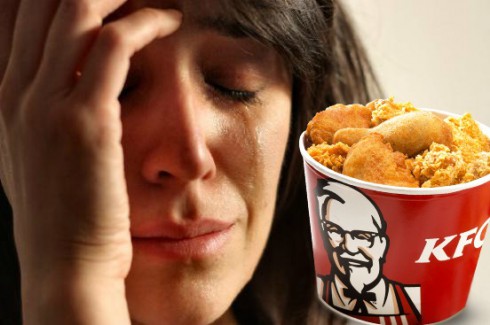 After her boyfriend broke up with her, Chinese woman Tan Shen needed a shoulder to cry on — and discovered Colonel Sanders’ did the job: According to Yahoo! News, Tan spent a whole week inside a 24/7 KFC.

“I hadn’t planned on staying there long, I just wanted some chicken wings,” said Tan, 26. “But once I got in there and started eating I decided I needed time to think.”

Tan said she didn’t want to go back to her apartment “because it was full of memories of him,” so she called in sick to work and laid low while dining on low-priced Original Recipe tenders. Jiang Li Lung, a worker at the Chengdu KFC, said it took three days before employees realized Tan had taken up temporary residence.

“When we asked her if she was ok, she said she was and just needed time to think and then asked for another box of chicken wings with extra-large fries,” she said, explaining they allowed Tan to stay. “She was after all a paying customer, even if a bit of an odd one.”

Four days and many buckets of fried chicken later, Tan decided to officially quit her job and go live with her parents. Plus, she explained, “I was getting sick of the taste of chicken so there was no point in staying there anymore.”

If she craves chicken ever again, the waitress said Tan is always welcome to return: “I guess we kind of miss her. It certainly made work more interesting.”

‘Sriracha: The Documentary’ is officially happening, thanks to successful Kickstarter campaign