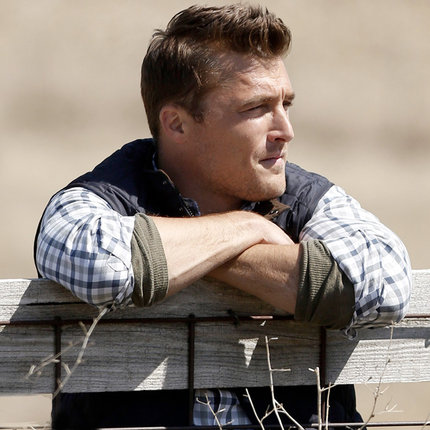 Who is Chris Soules engaged to? That is the question of the hour for The Bachelor 2015 fans. While the alleged answer has been floating around for a while, new details suggest there was more to the proposal than early Bachelor spoilers let on.

This season’s Bachelor spoilers – courtesy of Reality Steve, natch – have been predicting a certain blonde beauty with the voice of a castrated baby helium balloon ends up as the Bachelor 2015 winner, but new gossip indicates rumored final pick Whitney Bischoff may not have been Prince Farming’s first choice!

According to an Us Weekly source, Bachelor Chris was torn between choosing Whitney or Becca Tilley, and his choice may have boiled down to who he thought would accept his proposal. Though Chris has seemed equally infatuated with both Whitney and Becca on recent Season 19 episodes, virgin Becca has seemed a bit more lukewarm toward her suitor than her Southern Belle counterpart.

Chris surprised viewers last week when he sent Kaitlyn home in favor of Becca following the Fantasy Suite overnight dates in Bali, leaving Becca and Whitney to fight for that Neil Lane rock. Considering Bachelor spoilers 2015 have long since given away the likely ending, perhaps the question shouldn’t be who is Chris Soules engaged to, but rather, did he really end up with the woman he wanted to be engaged to?

Bachelor Chris has told the media he is “in love,” so hopefully his made-for-TV romance will last, no matter who he picked. The popular ABC franchise doesn’t exactly have the best track record when it comes to crafting lasting love, but maybe Chris and Whitney (assuming Reality Steve’s predictions about the Bachelor 2015 winner are accurate, of course) will be one of the lucky few couples to make it work.

Can’t wait for more? Tune in to ABC for the Women Tell All special on Mar. 2, and find more Bachelor spoilers 2015 here now.