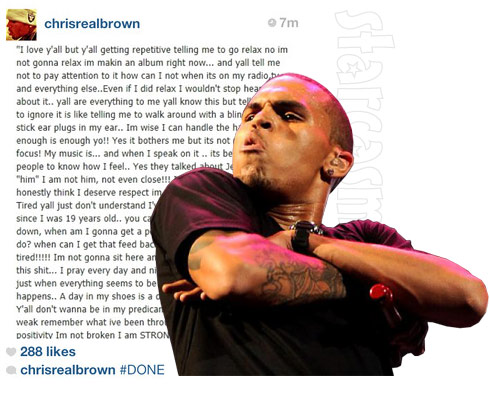 UPDATE – Perhaps all those questions are moot. Gossip Cop spoke to a rep for Chris Brown who says the instagram account in question isn’t even his. “It’s fake. He currently doesn’t have an Instagram,” the rep told the site.

Just a day after numerous online reports suggest singer Chris Brown may have faked his community service stemming from his plea bargain in the Rihanna assault case, and about a week after he allegedly got into a parking lot scuffle with fellow singer Frank Ocean during which Brown reportedly called Ocean a f***ot and threatened to shoot him, the troubled singer took to instagram looking for a little sympathy:

“I love ya’ll but ya’ll getting repetitive telling me to go relax no im not gonna relax im makin an album right now… and yall tell me not to pay attention to it how can I not when its on my radio,tv and everything else…Even if I did relax I wouldn’t stop hearing about it.. yall are everything to me yall know this but telling me to ignore it is like telling me to walk around with a blindfold and stick ear plugs in my ear… Im wise I can handle the hate but enough is enough you!! Yes it bothers me but its not my main focus! My music is… and when I speak on it .. its because I want people to know how I feel.. Yes they talked about Jesus… but “him” I am not him, not even close!!! Im a human being and I honestly think I deserve respect im sick of being accused… Im Tired yall just don’t understand I’ve been going through this sh!t since I was 19 years old.. you cant sit here and tell me to calm down, when am I gonna get a positive outcome out of anything I do? when can I get that feed back? Im TIRED do you read me im tired!!!!!! Im not gonna sit here and play victim, Im just tired of this sh!t… I pray every day and night for a new outcome… and just when everything seems to be going good some new sh!t happens.. A day in my shoes is a day in hell, believe it or not! Y’all don’t wanna be in my predicament … Before yall say im weak remember what ive been through.. My soul cries for positivity Im not broken I am STRONG….”

If you ask me I think Chris Brown is trying to have his cake and eat it too. He makes all these “mistakes” and then shows no remorse — actually it’s quite the opposite. Most often Chris Brown’s antics (if it’s OK to call beating a woman’s face bloody an “antic”) are followed by a series of public “F*** Yous” and laughing. Then he expects us to back off whenever his “antics” (like not serving community service for beating a woman’s face bloody – if that could be called an “antic”) pile up and there is a tidal wave of negativity towards him in the media? I don’t get it. Either sincerely be apologetic for the things you do or don’t, but if you’re not apologetic then don’t expect any sympathy from the media — and certainly not from the uncompromisingly vindictive world of internet commenters!

What do you think? Is Chris Brown being unfairly treated? Should everybody back off and let the man sing?