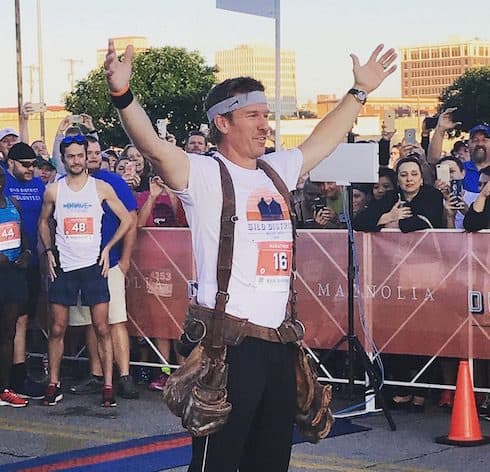 Chip Gaines’ first-ever marathon is in the books — and the Fixer Upper star did himself pretty proud with the result. After he and Joanna bid farewell to their über-successful HGTV show, Chip set himself a goal of completing a full marathon, then went ahead and organized one in Waco after finding out the city didn’t have a marathon of its own.

The inaugural Silo District Marathon, run on May 6th, saw just a hair under 500 runners complete the race. According to the full Chip Gaines marathon results, Chip finished the race in 5:21:54, coming in 378th overall. Not bad for a first-timer — especially when you consider that, as the photo above indicates, Chip really did run the race while wearing a tool belt.

Couldn't be prouder of you @chipgaines … YOU DID IT!! ??#silodistrictmarathon (watch my stories for more pics and videos!)

And here’s another look at the race from Chip’s perspective, via The Campground Company:

? We have had so much fun and our hearts have been blessed by being able to be at the #SiloDistrictMarathon this weekend in Waco! We have been able to donate $5,000 to MD Anderson and Texas Children’s Hospital for childhood cancer research and also donate a weekend of our time to this race that is giving so much back for rare cancer research! We are tired and had several long days volunteering with race packet pickup, registration, course cheerleaders and tear down crew! Our bodies are tired, but our hearts are full! We miss our babies so much, but allowing their lives to live on through what we do to help find a cure for childhood cancer research and awareness makes us proud mamas! I hope and pray that the Lord continues to open doors that will allow us to further the work of His kingdom and the world of cancer research! Thank you for a great weekend of giving back, @chipgaines, @joannagaines, @gigrunewald and @magnolia! We can’t wait for next year! . . . #silobration #silodistrictmarathon #magnoliamarket #CureRareCancer #MoreThan4 #MomsOnAMission #CureKidsCancer #BraveLikeGabe #WacoTexas #HappyCamper #YouWereMadeForThis #FindACureWithCampground #FineClothingForACause #ForeverCampStrong #CampRocks4Kids @sarah_p_tatum

Even better than Chip’s personal milestone, though, was the race’s collective effort: raising money for the Brave Like Gabe Foundation, which “support[s] rare cancer research and empower[s] all cancer survivors through physical activity.” The Gaines’ first-ever marathon raised a total of $250,000 for the foundation, per Runner’s Worldf.

Devotées of Chip’s marathon training will recall that it was professional runner Gabriele (“Gabe”) Grunewald, and her struggles with adenoid cystic carcinoma — which currently has no cure — who inspired Chip to start running in the first place.

Chip laid out his motivation for running in his very first blog post on the subject, back in January of this year. He also explained how a chance encounter with Gabe while the two happened to be in New York for very different reasons left him feeling inspired:

…A few months ago I was in New York City with Jo, and I happened to meet Gabriele Grunewald (Gabe) as she was running through Central Park. She clearly knew what she was doing, so I got to talking with her and it turns out, she is actually a professional runner. I asked her how long it would take for an average guy like me to train for a marathon, and she convinced me that with some old-fashioned hard work I could be ready by the beginning of summer.

Come to find out, back in 2009 Gabe was diagnosed with Adenoid Cystic Carcinoma (ACC), a rare form of cancer—so rare that it only occurs in 3.5 out of every one million cancer patients. But from what I can tell, this young lady hasn’t let her diagnosis or treatment slow her down for a minute.

After hearing Gabe’s story, I realized two things: I didn’t want to spend another second standing on the sidelines, and secondly, given what she’s gone through, I didn’t have any excuse not to give this a shot. So I committed.

Gabe made the trip from her Minnesota home all the way down to Waco for the Silo District Marathon. (The full event also featured a half marathon and a 5K in which Gabe placed third overall, running a cool 19:46.) She shared a pic of herself and Chip mid-race, which you can see in context here. We’ve embedded part of Gabe’s lengthy and delighted caption below: 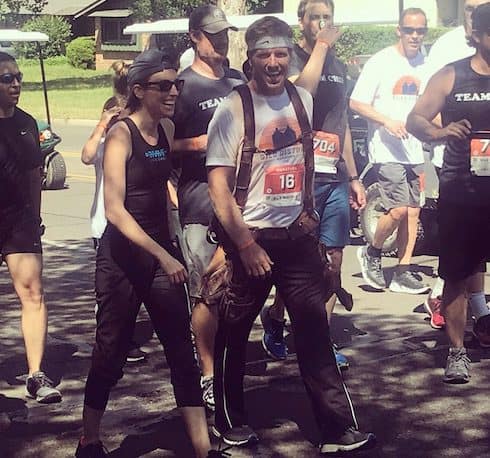 Chip Gaines has taken us on the adventure of a lifetime by letting us join him on his journey to become a marathoner! DONE! ✅ I couldn’t be prouder of Chip for completing 26.2 miles and even though he didn’t run every single step, he maintained a positive attitude while continuing to move forward the whole way through — and THAT is what life, and running, are all about. ❤️

Gabe also teased Chip for his choice of attire. Running long distances in pants is always iffy, but doing it when the high temperature is 87 degrees is very nearly crazy:

“Okay Chip, as your coach I can deal with the toolbelt but is it too late to negotiate on the whole marathoning-in-pants thing?” ? . . . The answer was YES and we found out yesterday that 26.2 isn’t quite *enough* of a challenge for @chipgaines! ??? . (PS: This pre-race photo is really begging for a caption contest!) . #silodistrictmarathon #toolbeltmarathon #thatlookedverywarm #ibetchipcouldrunanhourfasterinshorts #maybemore #justsaying #bravelikegabe #teamchip #chipgainesisamarathoner #congrats . ?: @taylordutch and @runnersworldmag

Chip and Joanna have yet to announce their next big endeavor. It’s been widely rumored for months that the Gaines crew is planning a return to TV, possibly as soon as next year, and that outdated Fixer Upper contracts were the real reason behind their departure after five successful seasons on their.

Before that, though, there’s one more pre-planned event the family has to attend to: the birth of Chip and Joanna’s fifth child, a boy, this July.