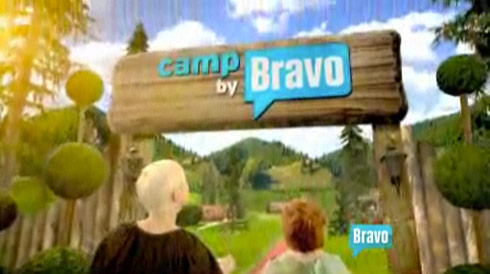 Instead of the elegant poolside party they’ve gone with the summer camp theme and the commercial features a slew of the most entertaining folks in reality programming as they get off a bus for a fun-filled summer of ping pong, archery, practical jokes, campfires and fireworks!

My two favorite parts are Giggy arriving in the cabin and Jill Zarin’s trust fall! (Although there’s something ridiculously sexy about a girl who knows her ping pong!) Oh, and of course it’s hard to not to love Andy Cohen’s enthusiasm as he gets off the bus – which looks exactly like I would imagine his reaction would be if he were going to summer camp with all these addictively entertaining folks!

Here’s a wonderful photo of Jill after Patti Stanger leaves her hanging to take a phone call: 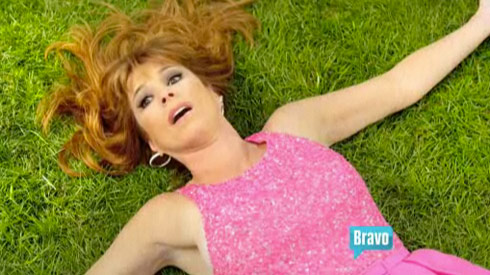 The spot is set to the music of Britney Spears’ brand new single “I Wanna Go” and features over 20 Bravolebrities promoting a summer lineup that includes the premiere of ten brand new and returning series! Here’s a timeline of when each premieres:

And for those Bravostorians wanting to document this commercial for the records, here is a complete list of the Bravolebrities who took part starting with the unequivocal housewives and moving on in no particular order after that:

We all know why Lisa Vanderpump led off the list! It’s the same reason why one of these Bravolebrities got their own video featuring his experiences at camp. I give you the summer camp chronicles of… GIGGY!

I’ll let the official Bravo press release fill in any other blanks about the promotion:

New York, NY – May 25, 2011 – Bravo Media kicks off another splashy “Summer by Bravo,” campaign, following the enormous success of last year’s network-wide, on-air event supporting an aggressive summer lineup of programming. The various promotional spots premiering Thursday, May 26 feature over 20 Bravolebrities heading off to camp – Bravo style – and moving to Grammy Award-winner Britney Spears’ new single “I Wanna Go.” With a blockbuster lineup of ten summer launches of new and returning original series, “Summer by Bravo” features network talent including Jewel and Padma Lakshmi by the campfire; Lisa Vanderpump, Giggy, Kyle Richards and NeNe Leakes exploring their luxurious cabin; Gail Simmons and Curtis Stone in an intense ping pong match; Jenni Pulos pulling a prank on Jeff Lewis; Patti Stanger failing a trust exercise with Kara DioGuardi and Kathy Griffin starting trouble, among others. For more information, visit www.BravoTV.com. Follow us on Twitter at https://twitter.com/BravoPR.
…
Last summer’s innovative network-wide marketing initiative, “Summer by Bravo” saw the 2010 summer ratings increase 18 percent among adults 18-49 versus summer 2009. Additionally, summer 2010 programming was up 23 percent over spring 2010 among the highly coveted adults 18-49 demographic.
…
Bravo fans can graduate from camper to counselor at www.BravoTV.com/summer-by-bravo on the web and on-the-go at m.BravoTV.com with exclusive behind-the-scenes photos and videos. Check out our camp talent show, hear our Bravolebrities’ favorite camp memories, and send camp postcards with our “Summer by Bravo” e-cards. And thanks to the Shazam mobile app, viewers can also tag the promo on their smartphones to access photos, videos, and behind-the-scenes content. Users can also share links to “Summer by Bravo” content via Facebook and Twitter.