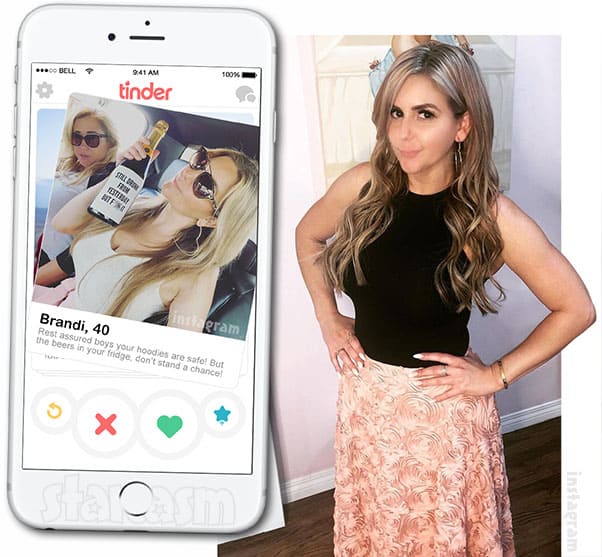 Despite never formally getting married, Brandi Passante and partner Jarrod Schulz were the First Couple of A&E’s Storage Wars reality series. Unfortunately, the First Couple quietly broke up more than two years ago. Jarrod moved on rather quickly with his new girlfriend Rochel Beckman, but Brandi’s dating life has been a big secret — until now.

The 40-year-old opened up about her dating life during the second half of a two-part “Spirit Talk” YouTube interview with Shavaun and Sabrina. (The full interview is included at the bottom of this post. Click here for the first half of the interview, in which Brandi pretty clearly reveals that she is coming back for another season of Storage Wars!)

“People that have watched Storage Wars for years have known Brandi and Jarrod as a couple,” Shavaun says at the very beginning of the video. “They actually split up a little while ago.”

“Is there someone you’re seeing now?” the astrologer and medium asks, “because I feel like there’s someone sort of floating in and out, or trying to come in.”

“No one in particular, no. Just going with the flow right now,” Brandi responds. “I was describing it as sort of emotionally dead inside, you know? Kind of trying to find my place. Like you said, I wasn’t really allowed to have an identity for many, many years. And so these last couple of years I’m kind of coming into my own and figuring out who I am. I just don’t have an attachment to anyone, you know?”

Even though Brandi has been romantically isolated while coming into her own, it isn’t for a complete lack of trying. “I definitely dated and things like that,” she says. “I just — I’m not getting that.”

If some of Brandi’s language seems a little harsh to you, you’re not alone. “My therapist was, like, ‘Stop calling it emotionally dead inside, you’re just closed off, you know, for a little bit. But, it’ll come back to you.'”

Brandi seems open to that slightly more positive outlook, but she’s not rushing anything. “Right now it’s not a big, um — it’s not something I’m really trying hard to seek out. I’m waiting until I can feel an attachment to someone,” she says.

#StorageWars couple @BrandiPassante and @JarrodMSchulz look to have called it quits after nearly 20 years. Check out the evidence, including photos of Brandi looking very single and very ready to mingle! 🍷💃🏼👀 https://t.co/RwRwYlIS9B

Psychic Sabrina lets Brandi know her patience will be rewarded. “It’s coming in the next few years.”

Sabrina tells Brandi that it will be someone with beautiful eyes, but not someone Brandi would normally be attracted to.

“As long as it’s not somebody too controlling,” Shavaun chimes in.

“I notice those red flags immediately,” Brandi assures her, “and I have no interest in that situation whatsoever. I usually dip out right away if there’s even an inkling of that.”

Sabrina and Shavaun then go back and forth narrowing down their vision of Brandi’s next boo, who will be a bit famous already, have dark hair and blue eyes, and will be roughly six feet tall. So, for all you guys sliding into Brandi’s DMs who don’t fit that description, you might want to look into some hair dye, colored contacts, and platform boots!

Actually, you can hold off on the platform boots because Brandi isn’t too concerned with height. “Everyone is taller than me, so it doesn’t matter,” she laughs.

And without a sense of humor, you might as well not invest in the hair dye or colored contact lenses either. “Looks have never been a huge things,” Brandi admits. “I think personality has been a bigger thing for me always,” she adds. “You have to be able to make me laugh, and I think that’s important — that back and forth. And you definitely have to get my personality because otherwise you might just be offended all the time.”

Here is the full second part of the interview in which Brandi recounts her unforgettable stays at Shavaun’s haunted house! She also talks about the recent passing her dad.

For those of you wanting to see more of Brandi, she seemed to clearly reveal in Part 1 of the Spirit Talk interview that she will be back for a new season of Storage Wars coming soon!

UPDATE – Brand and Jarrod will be returning for a new season of Storage Wars premiering Tuesday, April 20 at 9/8c on A&E!

If you’re really impatient and have a few extra coins laying around, then why not head over to Brandi’s Cameo and get yourself (or another Brandi fan in your life) a personalized message!