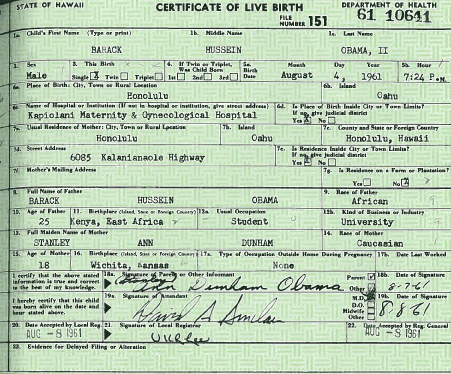 President Barack Obama convened a press conference for 9:45 am at the White House to discuss the matter of his birth certificate. Scanning around the cable news channels – Fox, MSNBC, CNN – the sudden announcement has created quite the buzz!

According to this CNN article, the president has finally come through with the most coveted document since President George W. Bush’s Air Force National Guard records! And it reveals the seemingly simple fact that Barack Hussein Obama was born in Honolulu, Hawaii on August 4, 1961.

Before the President’s press conference convened, Republican presidential hopeful Donald Trump (those words sound very odd when put together, don’t they?) spoke to the press in Portsmouth, New Hampshire, and took credit for getting the president to do something that the Clintons couldn’t do during the ’08 Democratic primary race, the McCain campaign didn’t want to do during the ’08 presidential campaign, and the national press didn’t seem interested in doing since the question was first raised: having the President prove his live birth in Hawaii. “I am really proud of myself,” says the Donald. “I achieved something nobody else has done. Now we can talk about the real issues like high gas prices and taking on China.”

At the President’s 9:45 press conference, he stated with a smile, “We provided additional information today about the site of my birth…. This issue has been going on for two and a half years. Over that time, I’ve watched with amusement, I’ve been puzzled at how this thing has kept on going. We’ve had every official in Hawaii – Democrat and Repubican – every news outlet, confirm that I was born (where I said I was.)”

He then continued the long story of the birth certificate controversy. “Normally, I would not comment on something like this… But two weeks ago, when the Republican House had put forward a budget that had huge consequences for the country, and when I gave my (counter response), during that entire week, the dominant news story wasn’t about these huge choices, but about my birth certificate.”

He then went on to make a larger point about focusing on the more important topics of unemployment, gas prices, the difficult decisions concerning balancing debt and investment. After concluding his brief remarks (about 7 minutes) he did not take questions from the press.

Well, two and a half years later, we finally have what many have been speculating on this whole time. Will it satisfy the biggest naysayers? What lies in store for right-wing writer Jerome Corsi’s upcoming book on the issue, Where’s the Birth Certificate?: The Case that Barack Obama is not Eligible to be President, due May 17? Does the President gain anything from this in the polls? Will this put a slowdown on Donald Trump’s political momentum? What do you think?