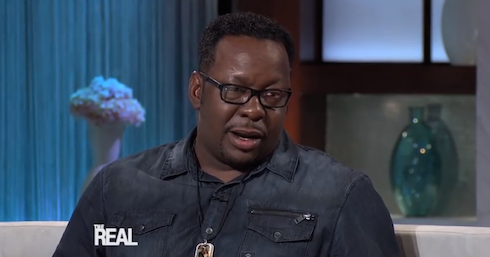 This week, Bobby Brown went on daytime talk show The Real for his first proper interview since the death of daughter Bobbi Kristina. While Brown touched on many topics regarding his late daughter–including his favorite memory of her, and his one regret regarding the days before her death–he also took the opportunity to address the larger implications of the Bobbi Kristina domestic abuse allegations.

The Real has released several clips from their Monday interview with Bobby Brown. In them, Brown expressed great regret that he didn’t do more for Bobbi Kristina during her final days before slipping into a coma. “If I’d been there two days earlier,” Brown said, “it wouldn’t’ve gone down like that.”

He also theorized the role ex-wife Whitney Houston might have had in calling Bobbi Kristina home. Here are two of the clips:

As for the “save haven” Brown plans to build, he said his intentions are directly related to the Bobbi Kristina domestic abuse violations currently leveled against Nick Gordon in the form of a $10 million civil lawsuit. Brown didn’t mention Gordon or the lawsuit on The Real; instead, he announced the Bobbi Kristina Serenity House, which will be a safe space for women in abusive relationships.

A statement on the house’s website reads “Bobbi Kristina’s Serenity House is being established as a safe haven, emergency center and advocacy resource center for women affected by Domestic Violence.”

There isn’t yet information on where the house will be located, or when it will open, but Brown promised more information in the coming weeks and months. For now, interested parties can direct inquiries at the House’s administrators.