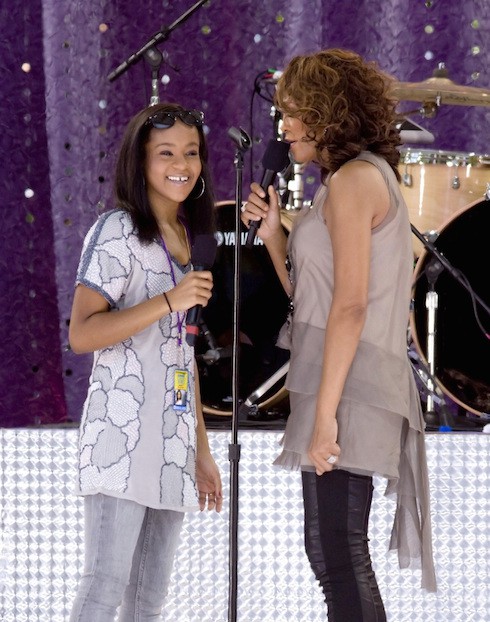 Bobbi Kristina’s family has turned her room at the Peachtree Christian Hospice into a shrine to both Krissi and her mother Whitney Houston. According to Houston family members, their goal was to make the room as peaceful as possible for Bobbi Kristina.

The Brown and Houston families had apparently long planned to move Bobbi Kristina back to the Roswell townhouse she called home, and to surround her with images of her mother. That plan changed, though, when the families moved Bobbi Kristina into the Peachtree Christian Hospice two weeks ago. Since then, the 22-year-old has been surrounded by a steady stream of family members–and, we now know, by images and mementos of her mother, along with Whitney Houston’s music.

Said a family insider, “After the decision was made to take her off life support, Bobbi Kristina was moved to the facility so she could pass on peacefully.”

The source described the scene inside Bobbi Kristina’s room at the hospice: “The family wanted Bobbi Kristina to be comfortable. She was dressed in her favorite pajamas, and surrounded by framed photographs of her and her mother. The lights in her room were dimmed, and scented candles were lit.”

The “shrine” to Whitney also includes a number of Bobbi Kristina’s favorite songs of her mother’s. “Didn’t We Almost Have It All,” “Greatest Love of All,” and “I Will Always Love You” are among the tracks that play softly, in the background.

Pat Houston confirms Bobbi Kristina drug use in emotional interview: ‘I was planning an intervention’

VIDEO Cissy Houston: “Not a great deal of hope” for Bobbi Kristina