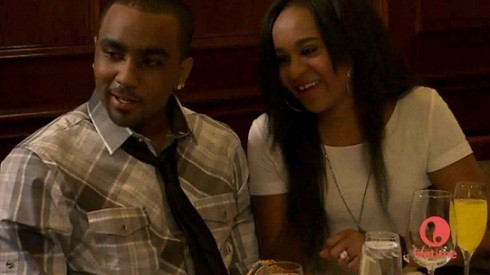 Bobbi Kristina remains on life support and near death in her Roswell GA townhouse. Recently, her family moved Bobbi Kristina back home from her Atlanta hospital bed in the hopes that being surrounded by familiar settings–and mementos of her late mother Whitney Houston–would help revive her, or at least bring her peace.

However, father Bobby Brown recently asserted that he will “never” remove Bobbi Kristina from life support. Brown also went farther, saying that he’s sick and tired of all the miscommunication and misunderstandings his family has had to endure since Bobbi Kristina was discovered unconscious on January 31st:

It’s background noise. Bobby hears these reports, and it’s annoying to him. He hates that people are just waiting for his daughter to die….Don’t believe any reports that Bobby is going to take her off life support. He’s never going to do that. I don’t think he’ll ever go there; if there’s a 2 percent chance, a 1 percent chance, a 0.1 percent chance, he will keep hope alive.

Many fans have begun calling Bobby’s definition of “hope” a cruel one, and claim that he’s only in favor of continued life support so he can try and become claimmant to Bobbi Kristina’s inheritance from her mother. Other fans, however, support Bobby in his efforts to exhaust any and every option for reviving his daughter.

Bobbi Kristina’s cousin Jerod Brown recently took to Facebook to ask that all fans of Bobbi Kristina and her parents–and, indeed, all of humanity–come together to pray for the beleagured 22-year-old:

I’m asking the world, every nation, every culture, every race, every human being to continue to speak life on my uncles daughter Bobbi Kristina and also send out a special prayer request for my uncle Bobby… PLEASE!!! As you all know, my uncle B has overcomed some of the toughest obstacles in his life and now to see him fight to save his youngest daughter, me as a nephew tremendously hurts. It hurts the most to know he gave you guys great years of music, moments, and accomplishments that you all became apart of loving (not just his music) him as a person, AND YET, Some still can’t find the compassion to never give up on (not just a person you love) YOUR DAUGHTER! We all have flaws… We all get weak… But we all are human. Let’s pray for strength for my uncle. Let Us ALL Speak Life on his daughter, my little cousin, BOBBI KRISTINA! I LOVE YOU UNCLE BOBBY. ‪#‎PrayForBK‬‪#‎PrayForBobby‬ ‪#‎MembersOnlyElite‬

While doctors have given Bobbi Kristina almost no chance of recovery, many members of her family, and many observers worldwide, have noted instances in their own lives where loved ones have made miraculous recoveries from brain injuries.